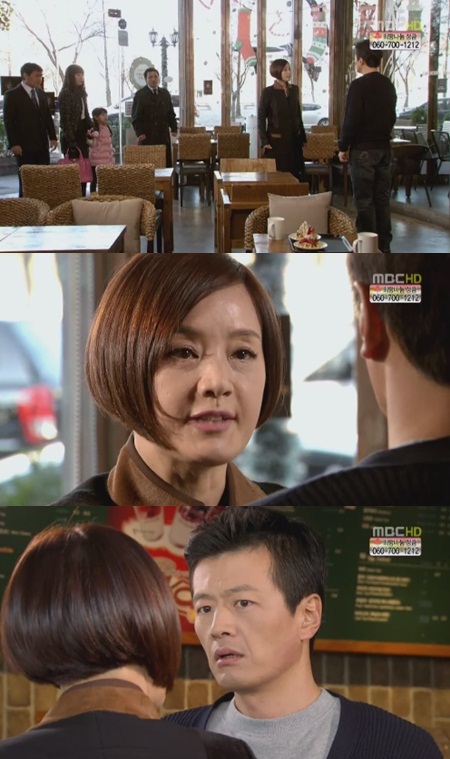 Reporter (Lee Hwi-hyang) lied to Jang Baek-ro that it was Kim In-guk who leaked the rumor in order to cover his tracks of defaming Jin-joo of the rumor that she was a single mother. Jang believed the reporter's words with no doubt and visited In-guk's coffee shop.

She slapped him right away and said, "Shameless human. You will never get what you want no matter what you do. Are you human? It wasn't enough for you to seduce my daughter but you had to make up rumors as well? I will put my life that she will never be in your circumstance even if she had to die alone".

Na Jin-joo stepped into the coffee shop just then with In-guk's daughter Byeol and was shocked. Byeol said, "Why are you doing this to my father? Who are you?" and cried.

Jin-joo yelled at her too saying, "What's wrong with you? How could you hit him like that in front of his daughter? I am so disappointed. I didn't know you were like this". Jang Baek-ro then said, "This man spread rumors saying that you had a child. To destroy you to get married".

No matter how much she tried to convince her mother, Jang Baek-ro wouldn't listen. Her father Sang-ho (Dok-go Young-jae) also agreed with his wife.

"[Spoiler] "Oh Ja-ryeong is Coming" Jang Mi-hee slaps her daughter's lover"
by HanCinema is licensed under a Creative Commons Attribution-Share Alike 3.0 Unported License.
Based on a work from this source