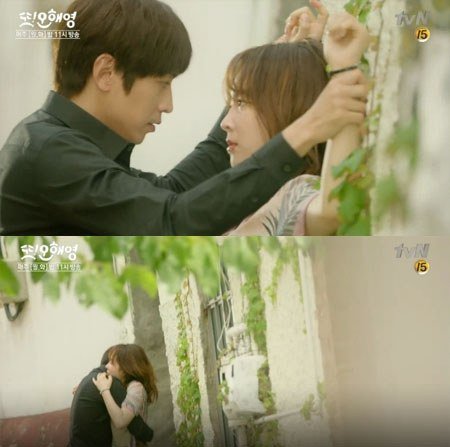 Hae-Young confessed to Do-gyeong , "I need someone, will take anyone, even the one who abandoned me" and then she continued, "Because of you, you keep changing your mind, you're the worst out of all".

Do-gyeong had not been able to decide his mind easily, because of Hae-Young's former, who all of sudden appeared and came back into her life.

Although the two had confirmed each other's heart, they could not express it under the circumstances. The two had an argument on the street for a whil.e And Do-gyeong grabbed Hae-Young and gave her a passionate kiss while holding her against the wall on the street.

However, after the kiss, Do-gyeong hesitated a little bit and left the spot hurriedly. Hae-Young got disappointed.

Meanwhile, Han Tae-jin (Lee Jae-yoon) revealed to Oh Hae-Young the true reason why he had cancelled their marriage.

Han Tae-jin said, "I was in prison" and "I was arrested one day after I broke up with you. You would have collapsed... It was right thing for me to break up and go". When Hae-Young found out about, she broke down in tears.

"[Spoiler] 'Oh Hae-Young Again' Eric and Seo Hyun-jin exchange passionate kiss against wall "
by HanCinema is licensed under a Creative Commons Attribution-Share Alike 3.0 Unported License.
Based on a work from this source