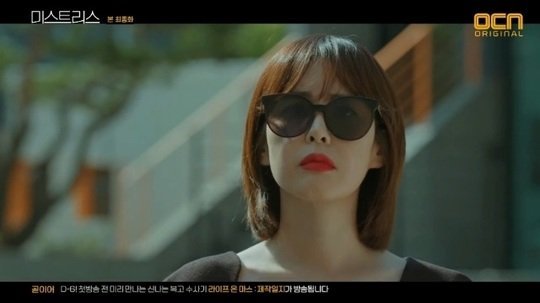 Lee Ha-na appeared in the latest episode of the OCN drama "Mistress".

It had been a year since Kim Young-dae (Oh Jung-se) died and Jang Se-yeon (Han Ga-in) looked after Park Jung-sim's (Lee Sang-hee) daughters after she admitted to killing Kim Young-dae. A unknown call came for Jang Se-yeon.

The call reminded her of Kim Young-dae two years ago as there was no sound at the other end of the line. Then, a woman checked out the spot that was the late Baek Jae-hee's (Jang Hee-jung) candle workshop, and Na Yoon-jung's (Kim Ho-jung's) salon.

The real estate agent told her, "This place has been empty for a year, but it's a good spot". The woman said, "I like it here. I'll take it". She had a strong vibe.

"[Spoiler] "Mistress" Lee Ha-na Makes Cameo"
by HanCinema is licensed under a Creative Commons Attribution-Share Alike 3.0 Unported License.
Based on a work from this source