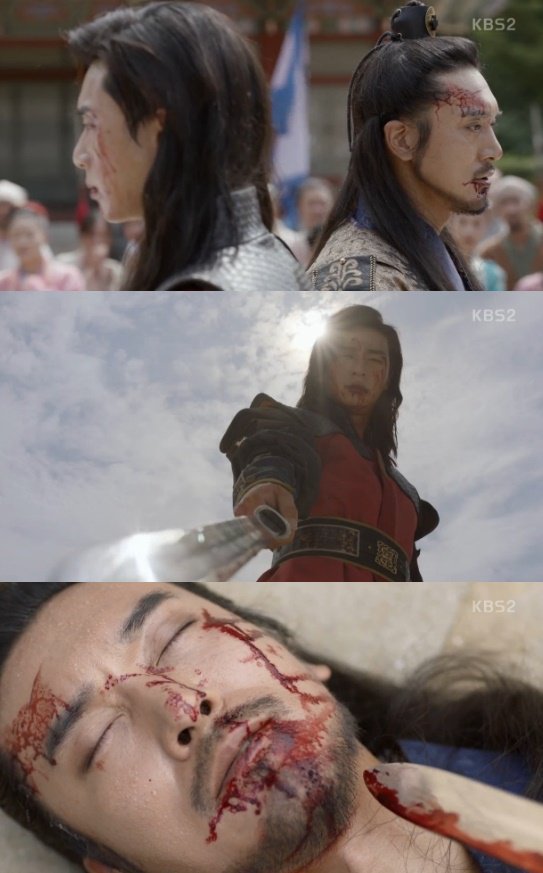 While the "Hwarang" are back safely, Park Seo-joon and Go Ara kissed.

On the fifteenth episode of the KBS 2TV drama "Hwarang", Seon-woo (Park Seo-joon) and Chang (Kim Min-joon) had a fight.

Chang held the people hostage and threatened the Hwarangs to see their king. Sam Maek-jong (Park Hyung-sik) was about to step out when Seon-woo announced, "I am the king". Chang said, "I don't care if you're king or not. I am going to make you king and make you kneel before me". Seon-woo suggested a duel.

Sam Maek-jong tried to stop him because Chang was trained by war but Seon-woo said he would win because he had something worth protecting. Seon-woo managed to get the upper hand from Chang.

Later, the two fought with their bare hands. Seon-woo never gave up and won. Chang said, "There will be no war. Free the people and the princess". However, the people wanted to kill him. Aro (Go Ara) convinced them there has to be hope and saved the rest of the hostages.

However, Chang had let them go to justify himself. One by one, the people started to die and Soo-ho (Choi Minho) got hit by Chang's arrow trying to protect Seon-woo. Chang said, "Let's fight again shall we? This time using weapons. I have no intention of letting you go alive".

Just then, Hwarangs with the lead of Wi Hwa-gong, arrived and protected them. Wi Hwa-gong said, "I was so proud of you all". Chang returned telling Seon-woo, "If we meet again, let's go hunting".

Seon-woo returned home safely and he told Aro, "I wanted to hold you so much". Seon-woo apologized for having ignored her and said, "I don't know what to say to you, but I love you". They kissed and Sam Maek-jong was watching.

"[Spoiler] "Hwarang" Park Seo-joon and Go Ara kiss "
by HanCinema is licensed under a Creative Commons Attribution-Share Alike 3.0 Unported License.
Based on a work from this source