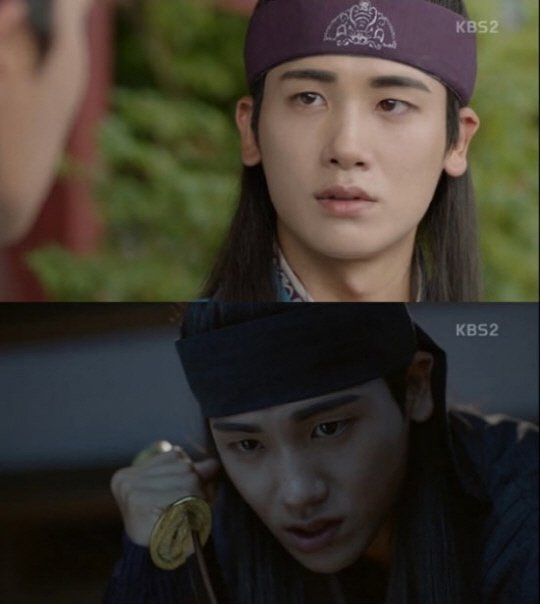 Actor Park Hyung-sik's worries have come to an end.

At the end of a long time of distress, the faceless king Sam Maek-jong (Park Hyung-sik) decided to reveal himself on the latest episode of the KBS 2TV drama "Hwarang".

He sat on the throne at a young age but he had to hide behind his mother. He couldn't utilize his power as a king or reveal himself as one. He was always being attacked and had to hide his true identity.

Previously, Seon-woo (Park Seo-joon) had yelled, "I'm king!" in front of Prince Chang (Kim Min-joon). Sam Maek-jong suffered from the pain of not being able to say he was the real king. Wi Hwa-gong (Sung Dong-il) who read his distress, said, "There hasn't been a king who called himself a coward. Bear with it".

Not only that, Sam Maek-jong witnessed Seon-woo and Aro (Go Ara) kissing and it hurt him more. Sam Maek-jong said to Aro, "I will change the throne and you. Come with me. I am no one's king. I will be yours and only yours". However, Aro said, "Are you using me as an excuse to run away? You've lived your life asking yourself why you have to be king. Those who have given up before can tell from your eyes that you have never given up before".

Sam Maek-jong made a decision. He went into Park Yeong-sil's (Kim Chang-wan) room and recovered his bracelet, holding a sword to his neck. He said, "I am the king you have been looking for. I am your master".

Meanwhile, Queen Ji-so (Kim Ji-soo) used Sam Maek-jong as bait to continue her regency. However, in the preview of the next episode, Sam Maek-jong sat on the throne.

The path to becoming king looks rough. He has to come out of his mother Queen Ji-so's shade and stand alone. Also, there's no knowing how Seon-woo will react after being offered the role of the king.

"[Spoiler] "Hwarang" Park Hyung-sik, time to yell "I'm king""
by HanCinema is licensed under a Creative Commons Attribution-Share Alike 3.0 Unported License.
Based on a work from this source