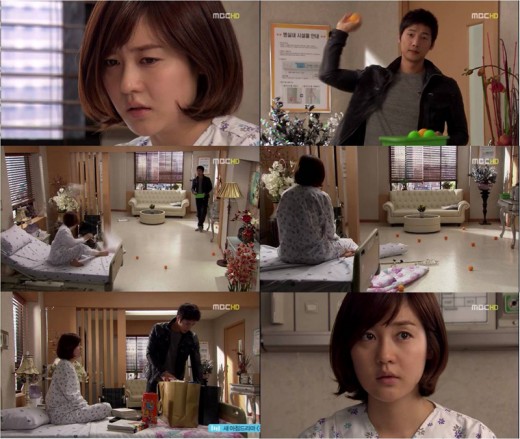 On the episode of MBC TV drama "Feast of the Gods" on the 1st of April, Ko Joon-yeong (Sung Yu-ri) lost it and threw everything around her, raging as Do-yoon (Lee Sang-woo) came to see her at the hospital and kept bothering with her with a ball.

Ko Joon-yeong hurt her hand due to Ha In-joo's (Seo Hyun-jin) wicked act during the in-flight meal contest, leaving her hand numb and was hospitalized. Do-yoon knew she had no feeling in her hand and tried to recover the feeling by using the rubber ball.

However, Joon-yeong thought he was being playful and warned him, "Stop it or I'll get mad" but he continued. Then the ball hit her head and Joon-yeong let out the anger that was built up inside her. She glared at him and threw everything that was around her.

When she was just about done cleaning everything up, Do-yoon handed her a shopping bag full of puzzles and comic books as he told her, "Play with them when you are bored. Hopefully your hand will return feeling if you move it around much". She then realized his efforts to help her and felt grateful.

Meanwhile, as Joon-yeong got over her fears and was able to hold a knife again, she lost tension and cried in his arms when Jae-ha (Joo Sang-wook) witnessed this, adding curiosity as to what will happen to these lovers.

"[Spoiler] "Feast of the Gods" Sung Yu-ri cries and rages at Lee Sang-woo"
by HanCinema is licensed under a Creative Commons Attribution-Share Alike 3.0 Unported License.
Based on a work from this source