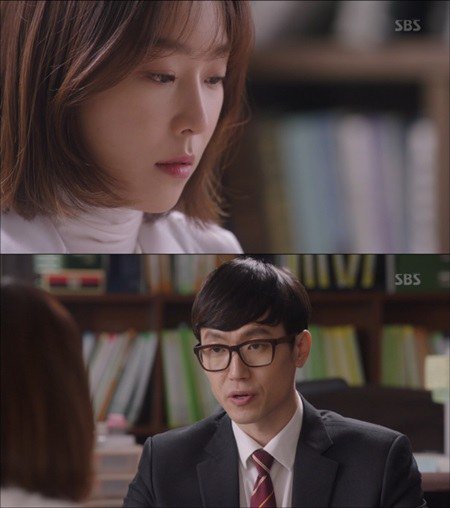 Han Suk-kyu and Seo Hyun-jin struck a rock in the most unexpected place. Han Suk-kyu's doctor license was ceased and Seo Hyun-jin was almost disqualified of her doctor's rights. Yoo Yeon-seok in the meanwhile, took a tack and brought Joo Hyun to Doldam Hospital.

Yoon Seo-jeong (Seo Hyun-jin) was taken hostage by a criminal (Lee Chul-min) who had a sickle on the episode of the SBS drama "Dr. Romantic".

The criminal explained that the person on the surgery bed was a rapist and why he had to kill him. Something terrible had happened while he was out of the house making more money.

Despite the terrible tale, Kim Sa-bu (Han Suk-kyu) stayed level-headed and performed surgery. After the surgery he told the criminal, "It's your choice to kill the criminal or not. But I wish you don't lose anything else. Don't lose your family". The criminal gave up and was taken by the police.

Kim Sa-bu later complimented Yoon Seo-jeong for doing a good job. She felt awkward but felt his sincerity. Kim Sa-bu told her, "Don't let go of your mentality and don't feel too stressed". On the other hand, Kim Sa-bu was still nasty to Kang Dong-joo. He asked, "Why do you hate me so much?" and Kim Sa-bu answered that he didn't behave like a doctor and Kang Dong-joo realized something.

There were several problems in Doldam Hospital. Someone found out that Yoon Seo-jeong had Post Traumatic Stress Disorder and reported her to headquarters.

Prosecutors asked Kim Sa-bu if he'd ignored the fact that she had PTSD and questioned Yoon Seo-jeong about the death of her boyfriend 5 years ago.

Yoon Seo-jeong said, "The reason I slit my wrist was because of overdose on nervine. I couldn't lie as a doctor to avoid a moment of risk".

"[Spoiler] "Dr. Romantic" Han Suk-kyu's doctor license ceased"
by HanCinema is licensed under a Creative Commons Attribution-Share Alike 3.0 Unported License.
Based on a work from this source