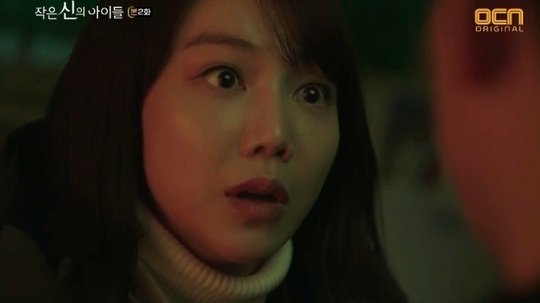 On the latest episode of the new OCN weekend drama "Children of a Lesser God", Kim Dan (Kim Ok-vin) told Cheon Jae-in (Kang Ji-hwan) about her unsurpassed abilities but he didn't believe her.

Cheon Jae-in requested Kim Dan to tell him everything that happened two years ago as she had foreseen Han Sang-goo (Kim Dong-young) kill his sister. Kim Dan hesitated knowing he wouldn't understand, but she began. "I don't know where to start, but to tell you the truth, I can see things".

"I see crimes and I don't even know if I really saw it. I feel it as real as it can be sometimes but sometimes I wonder if I'm dead. I saw the crime happening two years ago". However, Cheon Jae-in considered it a hallucination or dejavu. He asked, "Why can't you catch criminals with such convenient skills?"

Kim Dan said, "It's not something I can see whenever I want". Cheon Jae-in pressured her into telling him what he was going to do to her next and Kim Dan happened to see something; Cheon Jae-in killed Han Sang-goo and then himself.

Kim Dan said, "Listen to me carefully. Do not shoot. It will come back to you. The serial killer Han Sang-goo will get it for himself. Remember my words. Do not shoot. You won't be able to stand the fact that you killed someone".

"[Spoiler] "Children of a Lesser God" Kim Ok-vin Warns Kang Ji-hwan Not to Kill"
by HanCinema is licensed under a Creative Commons Attribution-Share Alike 3.0 Unported License.
Based on a work from this source