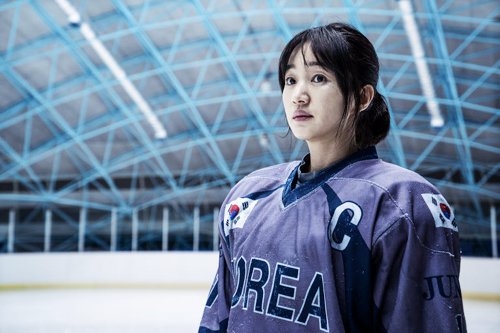 Actress Soo Ae has returned to the big screen with the sports flick "Run-off", which hit theaters on Wednesday.

The film, which is a sequel to the 2009 hit "Take Off", revolves around Korea's national ice hockey team, while the original was the story about ski jumpers rising from obscurity to the Olympics.

The actress, now nearly 20 years into her career, said in an interview on Tuesday she had long wanted to appear in a sports film before she gets any older as she likes sports and is quite athletic.

"As I know how to inline skate, I started comparatively easier than other members of the cast. Yet still it was very hard and seemed to test my limits. I realized I am not young anymore and felt good about joining the film before I got any older".

Soo Ae plays the role of a former North Korean athlete who defected to South Korea and joined its national squad.

She had some messages for Korean athletes who are competing in the Rio 2016 Summer Olympics in Brazil.

"While playing the role, I felt their passion and burden. I'd like to thank them for their efforts and cheer for them until the end", she said.

"Soo Ae Embraces Ice-Skating Challenge in New Movie"
by HanCinema is licensed under a Creative Commons Attribution-Share Alike 3.0 Unported License.
Based on a work from this source