Song Seung-heon "Invincible" will be "lucky to break even" 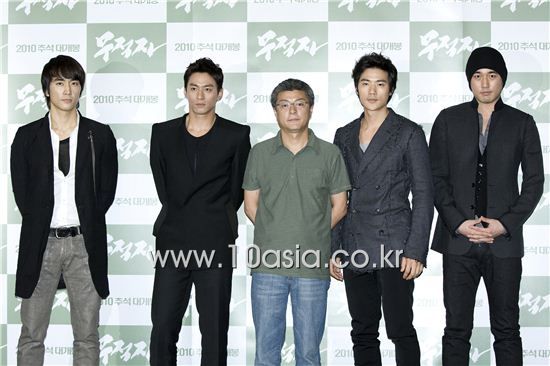 The outcome of how well a remake will do compared to its original production, particularly a remake of a movie which was beyond popular and rather considered a cultural phenomenon while bringing back feelings of nostalgia to many people, is pretty predictable -- it will be a tough game to win. Hence, like said it said that it aims at not being a remake but a 'rewake' of Hong Kong film "A Better Tomorrow, 1986", in 2010 "A Better Tomorrow" is striving at awakening the values that had been lying dormant like legacies. Revitalizing the not-so-hot term 'brotherhood', used to refer to where one sacrifices one's life in the name of loyalty, in a new era and instilling that into those who have unconditional affection for the original work, looks quite obviously like a tough fight. But even though a lot has changed from the original movie and it is armed with action of greater scale, the movie touches a spot in the viewer's heart in how its males shed tears although they act tough up front. Below are excerpts from the press screening held in Seoul on Wednesday.

Q: Joo Jin-mo, Ki Kang-woo and Song Seung-heon, all of your characters have crossed over to South Korea from the North. What is the reason you pulled in the element of defectors into the movie?
Song Hae-seong: I wouldn't have done "A Better Tomorrow" were it not for the plot being based on defectors. When I decided to do the film after having declined the offer the first time around, I thought about how "A Better Tomorrow, 1986" should be made in Korea. It's about brothers but I thought it could have a new xxx if it could be about brothers not just in Korea but be about brothers who are defectors.

10: This is a movie whose story is based on just the four of you plus if you take the masculine image of the original film "A Better Tomorrow, 1986" into consideration, there must've been some competition to look cooler than the other person.
Joo Jin-mo: Despite my effort to look cool, my wardrobe wasn't enough to... (laugh) I didn't think that. My only concern was to express how my character worries and is in conflict as the older brother. As for looking great, there were other people to do that, not me. (laugh) I did put in some effort in the end to try to look great but I don't know what you'll think of it.
Song Seung-heon: We couldn't ignore that aspect to it because many people will be thinking of "A Better Tomorrow, 1986". And once you actually watch the original work, you realize that it doesn't contain a lot of spectacular scenes or action sequences, but I think I felt more like that because I had to play the role of Chow Yun-fat who is remembered quite strongly for the visual elements such as his two pistols or matchsticks. When we first started, we said we'd be lucky to break even. Many people would be skeptical, thinking 'Let's see how well you guys can do' since we're doing a remake of a movie that is considered legendary in people's minds. I personally had a lot of concerns while in filming because my character had stronger actions and visuals than the other characters. I couldn't copy the original film yet I couldn't ignore the scenes that its old fans remember it for.
Kim Kang-woo: I felt that my character wouldn't come to life if I tried to make him look great. I had a lot of crying scenes and emotion was priority so I tried my best to deliver a sincerity about my character.
Jo Han-sun: For me, it was only my clothes that were great. (laugh) Otherwise, I put in efforts into figuring out how to look mean.


10: Everyone are male actors -- from the main stars to the supporting roles.
Joo Jin-mo: The best thing about not having an actress on set was that we could communicate openly and in a straightforward manner. We saved on a lot of time because we would speak our minds directly without having to beat around the bush. Of course, the reason we were able to become comfortable enough to do that was because there were many gatherings outside of the movie set where everything was always rushed. When the four of us gather, we'd always end up having a drinking bout. I even saw Song fall sleep with his mouth open while drinking. (laugh)
Song Seung-heon: He said there were no women but Kim Ji-young was there too. (laugh) Close to 70 percent of the filming took place at night and it would be near 5 a.m. by the time we're done. Then we'd sometimes sit by the sea and hold a drinking bout while watching the sun rise. We talked a lot about movies while eating grilled pork. Everybody, including the director, actors and crew, were like family. This is a precious film through which for the first time, I felt, ah, this is what shooting films are about, this is where the fun lies.

10: Song Seung-heon, you have always said you want to take on a rough-mannered character. You must've quenched that desire through "A Better Tomorrow".
Song Seung-heon: People usually refer to my soft and tender image from "Autumn in my Heart", "You and I", and "Summer Scent" when they talk about me so I wanted to change that. I think a male actor should give off the vibe that he's a male actor. After turning 30 and completing my military duties, I've taken on "Fate", "East of Eden", and now "A Better Tomorrow", so fans reproached me saying I'll be in an organization again (laugh) but I really wanted to change so I'm making these attempts.

10: Were there any roles you wanted to take on other than your own?
Joo Jin-mo: Male actors look for roles that are about real acting once they pass the age of 30. When I first read the scenario, I was interested in Jo Han-sun's character and after watching the completed film, I was able to feel that there was a big change to Jo. Whereas Jo played the character as someone who is more sharp, I think I would've been able to show him as a more of a bad guy by portraying him as a sly character. (laugh)
Song Seung-heon: All four characters have such distinctive characteristics and everyone is so great that I didn't dare think I'd do better than them but if I had to pick one, I would say that Jo's role caught my eye because Jo pulled it off well that he seemed hateful to the point that I wanted to beat him up. (laugh) But of course, I have a stronger attachment to my role. (laugh)
Kim: All male actors desire to take on the bad guy so I too wanted to try playing Taemin who faces all three characters.
Jo Han-sun: Everyone wanted my role... I liked my role the best (laugh) and I don't think I would've been able to play any other role even I was asked to. I saw from the movie that everyone seems to have had a very hard time. I like my role! (laugh)

10: Joo and Song, it seems that you two are very used to handling guns.
Song Seung-heon: There were a lot of scenes where I had to use a gun so I practiced at a shooting range and I had a scene where I assemble a gun so I was handed an authorized gun to practice that at home so I could get used to it. In the end of the movie, I use a large gun too and it was so heavy that my shoulder hurt a lot but it was also thrilling.
(laugh)
Joo Jin-mo: To add on a little more explanation about guns, you usually end up blinking your eyes if you shoot at a shooting range but I was told the scene wouldn't look nice that way so I practiced to shoot while keeping my eyes open. When we actually go into shoot, each blank costs 10,000 won so we didn't get to practice much and instead practiced with toy guns. Once we go into shoot, we'd shoot excitedly. (laugh)

10: Jo Han-sun, you'll be entering the military tomorrow. How do you feel right now?
Jo Han-sun: I feel very bad. I'll be leaving without having promoted the film properly. I feel bad for the other actors but I'm hoping they keep working hard. (laugh) I'm supposed to have gone earlier but I ended up going late because it's hard to make a living. I'm going to work hard in the military.

10: Song, you must have some things to tell him as already having been in the military.
Song Seung-heon: Uh... I thank him for promoting the film up till the day before his military entry, and as for talking about the military, maybe Joo, who had a harder time, could... (laugh)
Joo Jin-mo: I'm not too sure because I became an actor after I fulfilled my military duties but isn't it compulsory for guys to go to the military? (laugh)

"Song Seung-heon "Invincible" will be "lucky to break even" "
by HanCinema is licensed under a Creative Commons Attribution-Share Alike 3.0 Unported License.
Based on a work from this source