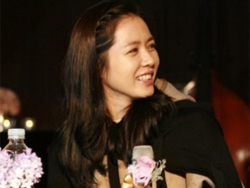 Actress Son Ye-jin rang in her 29th birthday with 100 of her fans from all over the world. We're talking from Korea, Japan, Taiwan, Hong Kong, China, Australia, and America, just to name a few. They all gathered on January 23rd-- although Son's birthday is on January 11th -- at the Musical House in Yaksu-dong of Seoul.

To make the event all the more special, it was also the 10th anniversary of Son Ye-jin's fan club. In honor of these milestones, Son prepared sandwiches and refreshments for her guests, along with a small present for each of her fans. She presented them with a scarf from the company that she currently models for.

Son held a Q&A session to squelch any curiosities her fans may have had, watched a highlights video of all of her previous works, and played games with her fans such as rock, paper, scissors, speed quiz via cell phones, and Lucky Ladder. For certain winners, Son took the time to give hugs and take pictures with her fans.

Aside from the birthday congratulations of her fans, a few other k-pop entertainers sent their well-wishes via a video clip. Actors Lee Min-ho and Jung Sung-hwa, who acted with Son in "Personal Taste", Go Soo who teamed up with her in the movie "White Night", and Lee Min-jueog and Moon Chae-won who are both signed under the same entertainment agency as Son were featured. Moon Chae-won was actually at the event in person, sang a congratulatory song for Son, and acted in a short skit with her as well.

Son laid low after shooting the drama "Personal Taste" in 2010, although she did make a cameo appearance in the recent drama "Secret Garden". However, that's set to change as she is currently signed on to star in a new movie, "Spellbound".

"Son Ye-jin Celebrates Birthday With Fans"
by HanCinema is licensed under a Creative Commons Attribution-Share Alike 3.0 Unported License.
Based on a work from this source