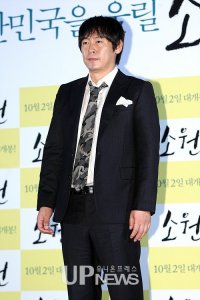 "Cruel Winter Blues", which goes on release Thursday, is a little different from conventional action flicks, even if it deals with revenge and betrayal like much of the genre. But apart from a special emphasis on a mother's love, the movie stands out from the crowd thanks to a masterful performance by Sol Kyung-gu, who comes to feel uncontrollable love for the mother of an enemy he has to "dispose of". Though passionate and ready to take on anyone, Seol in the movie also portrays a sneaky, shameless coward. The Chosun Ilbo spoke to him about his life and craft.

―You seem to be a bastard in the film, but unexpectedly it fits you well.

Someone asked me if it was my true character.

―You portray a thick-skinned, shameless person

"I agreed with the director before shooting not to portray an emotional character. Even for clothes, I instantly switched from suits to shell suits, trying to give the impression of a bottom feeder. Yet at the same time I needed to convey a sense to the audience that I could suddenly switch to a totally different, dangerous persona".

- At the end of the movie, your character is filled with anger and pent-up resentment, which has been your standard image.

"It's not easy to get away from that image. When shooting 'Peppermint Candy' (1999), I struggled a lot to get away from the image, but it was really difficult. I just can't stop myself from being expressive. At the end of the movie, I tried very hard not to cry, but the tears were just streaming down my face".

- Are you a bit bored with the image?

-It seems you want melodrama, yet your audience wants to see you screaming with rage.

"A middle-aged anchor introduced 'Lost in Love' as my major film. I think it depends on personal taste. Again, I urge you to avoid stereotype".

-Going back to the movie, it's clear that "Cruel Winter Blues" tries to be different from other gangster flicks

"I wouldn't have got involved in the film if it was just about organized criminals brandishing sticks and fighting to survive. I think a line by Na Moon-hee (a veteran actress) at the end of the last scene is the gist of the movie: 'What makes you cry so sadly?' It really captures so well the conflict between motherly love and revenge, between guilt and regret.

-What about in reality? Are you a good son to your mother? Do you call your parents often? (He is the first with a younger brother and sister. His parents live in Ilsan.)

"Maybe once or twice a month. Yet who are they going to blame? My unlovable, blunt character just came from them".

"I want to be. I try to treat them well; sometimes I buy rice and clothes for them"

-You buy your mother's clothes?

"Yes, when I go to small towns for shoots, I go to flea markets or other local markets to buy comfortable clothes for her".

- Are you embarrassed to be seen buying women's clothes?

"Well, it's just for my mother. When she gets them she complains. But next time I see her, she's wearing the clothes. She seems to put on silent pressure to give her more clothes".

- A sensitive question. Some commentators say your personal pain (he recently divorced after a 10-year marriage) deepened your acting and broadened your art.

(Pause) "I agree. I have become more thoughtful. You may be fed up with all the stories about blood-type. But let me talk briefly about blood type. My blood type is O, but many people think I am B. I think it's because I get too immersed in things and get very sensitive once I'm into something, especially during shoots. People daren't talk with me during a shoot. I'm so tense that I never catch cold during a shoot".

- Do you personally believe your difficulties have deepened your characters?

"I sometimes watch Na Mun-hui staring blankly at the sky or the ground. And even then, I feel a kind of aura surrounding her, something too mysterious to explain. I can imagine how many hardships and difficulties she went through as a woman actor to act at that old age. However, her hardship and experience create a very strong sense of presence, even when she does nothing. I want to be like her".