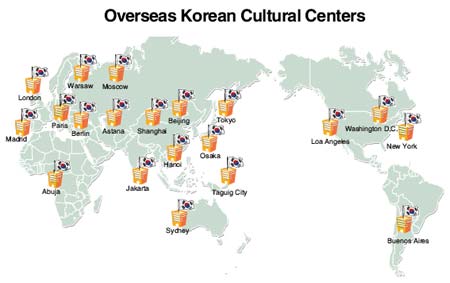 ULAN BATOR ― A strong presence of the Korean culture wave, or "hallyu", in Central Asian countries such as Mongolia, Uzbekistan and Kazakhstan has engendered a new phenomenon here: Fans are eager to learn the language their idols are speaking.

But a mismatch between the demand for Korean language courses and a lack of state-run cultural centers providing free language courses have left some overseas fans with no place to go to learn Korean.

Overseas Korean Cultural Centers run by the government are mostly located in advanced countries where demand for the language is relatively low.

In Mongolia, the hallyu boom has inspired many college students to take Korean studies as their major.

Altanchineg Delgerbayr, a graduate school student at Ulan Bator University, was motivated to pursue a career teaching the subject after she became a huge fan of Korean dramas in middle school.

The 25-year-old, the winner of last year's Korean language speech contest hosted by the Korea International Cooperation Agency (KOICA), said last Monday that Korean is one of the top three foreign languages that Mongolian students want to major in.

"In 2009 when the Korean drama 'Temptation of a Wife' aired in the evening, there was almost no traffic in downtown. People rushed home after work to watch the drama", she said. The drama hit a whopping 85 percent viewer rating at the time.

Every year Ulan Bator University admits 90 students out of nearly 360 applicants to the Korean Studies Department, she said.

Dozens of Mongolian universities have created such a department.

In Uzbekistan, it's easy to find young people who say their life-long dream is to visit, study or have an opportunity to work in South Korea.

Korean volunteers working in rural areas are often times told by locals that their dream is to travel to Korea at some point in their life.

The Korean drama "Pasta" has become popular in the country.

As in Mongolia, there are few programs to link these aspiring Korean visitors to Korean culture in Uzbekistan.

Fans living in Astana, the modern, sophisticated capital city of Kazakhstan, are relatively fortunate, compared with their counterparts living in other Central Asian nations.

They can access Korean culture through a brand-new center which opened last year. It is the only Korean Cultural Center in Central Asia.

Nearly 1,000 young Kazakhs are on a waiting list for a Korean language program offered twice a week at the center.

Gulnar Aubekerova, assistant director of the center, said Thursday many of them are the fans of Korean dramas or K-pop and were motivated to join the free course after watching dramas. "I don't have a daily visitor tally. But one thing for sure though is that the Korean language program here is very popular among young people", she said.

Even countries with which Korea has a vital trade interests, such as Peru, have no such centers.

In an op-ed published in The Hankook Ilbo in June, Jang Bong-soon, chief of the KOICA Peru office, proposed that the culture ministry set up a cultural center in the South American country to meet soaring demand for Korean language courses there. Jang said the Korean wave has a strong presence in Peru. "Now is the time to live up to their expectations by opening a cultural center here", he said.

Korean firms invest more in the resources-rich country than any other Latin American country.

The Korean Culture and Information Service (KOCIS) said they consider several factors, including trade interests, diplomatic relations and the Korean wave, as major criterion for the establishment of cultural centers in foreign nations.

KOCIS is in charge of opening up and operating the overseas centers.

At present, there are 16 Korean Cultural Centers overseas, including Washington, Los Angeles, Sydney and London.

KOCIS is now preparing to open centers in India, Mexico, Turkey and Hungary later this year.

Earlier, it committed itself to establish centers in less developed countries to meet the demand for Korean language courses.

But there remains a gap between their commitments and selection of center locations.

Since 2008, it has opened the cultural centers in Britain, Poland, Kazakhstan, Washington D.C., Nigeria, Australia, Spain, the Philippines and Indonesia.

The list of new locations includes shows KOCIS is only partially living up to its commitment as it also includes highly-developed nations.

"Seoul fails to meet demand for 'hallyu'"
by HanCinema is licensed under a Creative Commons Attribution-Share Alike 3.0 Unported License.
Based on a work from this source