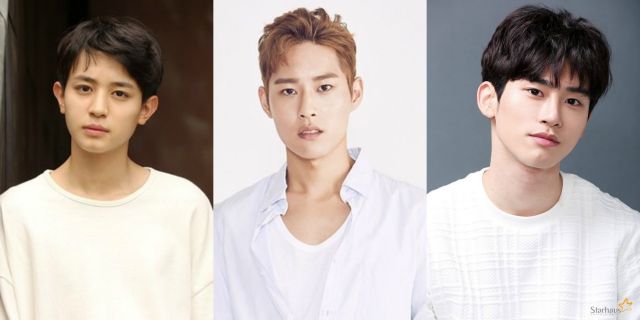 With a slew of new dramas and films coming out, it is the perfect time for rookie actors to jump in and try their hands at their art. Newbie actors Han Kyu-won, Yoon Jung-hyuk and Jung Yoo-ahn have all signed onto new projects with excellent sunbaes (seniors) to learn from.

Han Kyu-won is first up, joining "Number Woman Gye Sook-ja" after his debut performance as Lee Chan-young in "Defendant". He will play Jay, Gye Sook-ja's (Jeon Hye-bin's) trainer, a handsome, warm-hearted young man who isn't so good with words. This will be a good role, challenging this newbie to really take command of his facial and body expressions.

Next up is multi-tainer Yoon Jung-hyuk of SURPRISE U, Fantagio's acting group. Like his sunbaes from 5urprise (Gong Myung, Kang Tae-oh, Seo Kang-joon, Yoo Il, and Lee Tae-hwan), Yoon Jung-hyuk will be striking out into drama, taking a turn in tvN's "Revolutionary Love" with Choi Si-won and Kang So-ra as Department Head Han. His role is to deepen the conflict between our main characters and be a discerning man. For such a young actor, taking on a department head sounds like a challenge indeed. For this multi-tainer it will, no doubt, be a fun one.

To round up the casting news we have Jung Yoo-ahn who is appearing in the movie "Rampant" with Hyun Bin and Jang Dong-gun. The story is an interesting one surrounding a very popular theme of late: zombies. To be specific, this is a action zombie sageuk (historical) film led by Hyun Bin who is on a quest to save Joseon from the undead. Jung Yoo-ahn will play a son who fights zombies to save his family and joins the good fight.

Which newbie are you most looking forward to seeing? Let us know in the comments below!