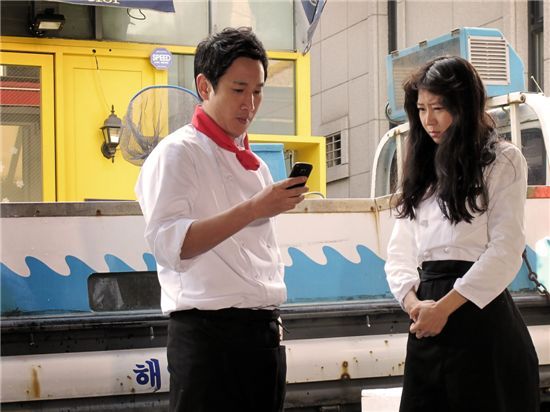 Like many television dramas about working professionals, MBC TV series "Pasta", which features an Italian food chef, is ultimately about romance in the kitchen. Even though the uptight chef Hyun-wook (played by Lee Sun-kyun) proclaims, "There will be no women in my kitchen", he will make Yu-kyung (Gong Hyo-jin) fall for him by becoming her mentor in times of crisis and Yu-kyung will not hesitate to express her emotions to him. What makes their predictable story interesting is that the kitchen -- where the two play mind games with each other -- is not just a physical setting for the show but also where their public and social relationships exist. So to describe the show accurately, "Pasta" is a story which talks about the difficulties of handling romance in the kitchen.

As the new chef of La Sfera, the first task Hyun-wook carried out was to confirm the hierarchy of chefs in the kitchen -- from assistant chef Seok-ho (Lee Hyung-chul) down to Yu-kyung. Of course, such a strictly hierarchical society -- in which one can hold a frying pan only after working three years as an assistant without complaining -- had already been witnessed in hospital settings in medical dramas that have aired after MBC's "General Hospital", where there is a clear social division between interns and residents. However, in the case of SBS TV series "Surgeon Bong Dal-hee", which contained the most sophisticated storyline about hospital romance, the biggest obstacle to the love between the two main characters were their differences in personality and their circumstances, not their public relationship. But the formation of a romantic relationship between Hyun-wook, who stands at the top of the hierarchy and wields all the power in the kitchen, and Yu-kyung, who is at the lowest rank in the kitchen apart from the kitchen assistant, is an extremely sensitive issue. The reason Hyun-wook let Yu-kyung cook the Italian ambassador's Vongole pasta was due to her keen ability to predict the menu and her hard effort in preparing short-necked clams for the dish. But regardless of whether they had studied in Korea or overseas, the higher-ranking chefs at La Sfera threw suspicious, displeasing looks at the two. In the kitchen -- a place where everyone gets sensitive over who gets to hold the frying pan -- it is impossible for the chef in charge to toss a warm loving glance to his girlfriend chef.

This is the precisely why the little mind games in "Pasta" do not seem overcooked. The two -- or rather Hyun-wook, to be more accurate -- never acts out of line. Even in a possibly romantic situation, such as when they are waiting for a ferry to arrive on the East Sea coast, he treats Yu-kyung as if in a public setting. There are situations where Hyun-wook will seem like he is harassing Yu-kyung -- when he trys to strangle Yu-kyung with chopsticks or hit her lightly on the head -- but such moments arise only in situations where he is punishing her as a cook. After firing Yu-kyung on his second day on the job, Hyun-wook runs into her at a crosswalk and blurts out, "Let's do it -- date". The reason he said that in such way is not because he is 'insane' but because he -- a man who believes in strict principles -- cannot regard the woman he is dating as an equal when they are involved in a social relationship where a clear hierarchy exists. Because Hyun-wook's fastidious attitude toward Yu-kyung is a necessary condition to the storyline, the mood between the two characters also changes depending on his attitude. But, at the same time, this is also what makes one worry about the future episodes of "Pasta".

As mentioned before, this drama is a story about romance in the kitchen. This an antinomic situation to a certain extent. Hence, in order for a thesis to be established on a realistic level, one of them has to leave La Sfera or Hyun-wook has to break his own principle. The drama appears to go with the latter path, as Hyun-wook was seen blowing a kiss on Yu-kyung's eyelid in the kitchen. Of course, it is not too sudden saying "I like you" in the tenth episode, but the problem is what happens afterwards. The charm of Hyun-wook was not that he was an finicky and rational person, but that he was finicky because he was rational. And the gutsy attitude of Yu-kyung, who wants to win Hyun-wook's approval by becoming a better cook and not with her femininity. So can those little moments, which were lovely because they could not cross the invisible line between them, be seen again in "Pasta"? If the show's producers can solve this dilemma well, then "Pasta" may perhaps be remembered as a drama which presented a new formula for workplace romance stories.

"How nice it would be if there was a recipe for love and life, just like there is for food". This quote, from a certain novel is exactly what main character Yu-kyung (played by Gong Hyo-jin) from MBC TV series "Pasta" is likely to have uttered. And it is because in short, the show is about her, an amateur both as a cook and in finding love, trying to find just the right recipe for her life. Unlike Hyun-wook (Lee Sun-kyun) who believes work and love should not mix and Se-young (Lee Honey) who "used to think a woman should give up being a woman to become a cook", both love and cooking are equally important to Yu-kyung. Her dream is to balance out work and love, which is also what "Pasta" strives for as a romantic cooking drama.

As soon as Hyun-wook is appointed the new chef to La Sfera, he causes turmoil by carrying out various reforms in the kitchen. He places great emphasis on the fact that the kitchen should be an independent space "free of interference and influence from the restaurant's owner". And his great talent is what drives him to be the absolute tyrant in the kitchen. But that very kitchen, where the order of rank is based entirely on skill, seems very unstable. He declared there will be no women in his kitchen but has already made an exception with Yu-kyung, he asserted there is "no need for love and the like" in his kitchen but he cannot help becoming increasingly attracted to her and he screamed out that there cannot be two chefs in his kitchen but Se-young becomes the co-chef. Like so, Hyun-wook goes on about 'his kitchen' but in the meantime, his world continues to give away. Statements such as "The kitchen isn't yours chef. It's the customers'", said by Yu-kyung or "The kitchen is an art of teamwork" or "You can't create a great dish by being great at using the knife alone", as assistant chef Seok-ho (Lee Hyung-chul) said, show that Hyun-wook's kitchen is not the perfect picture. He has yet to answer Yu-kyung's question about the kitchen he dreams of. Like he himself said, his kitchen "has yet to take form".

Yu-kyung is the one who has the largest influence on Hyun-wook's world. Unlike Hyun-wook whose ideals revolve around the kitchen while stressing authenticity and principles, Yu-kyung's world is flexible and without boundaries. If a customer wants a pasta delivered, she will do it even if it means having to carry it in a steel box, and even though she may fail, will try to find her own solutions to problems such as when the hall and kitchen clashed on the issue of serving pickles. Yu-kyung is also the only one in La Sfera who moves freely back and forth between the chaotic kitchen and the peaceful hall of the restaurant. Her fluid personality is further confirmed when she talks of her dream kitchen. Hyun-wook will mock her when she says she will make a restaurant where she will do everything -- from the cooking to the serving -- the way the customer wants things to be, including changing the recipe. But Hyun-wook himself will reveal he has been influenced by her when he says he will look for a restaurant which will add more salt to a dish when he asks for it, rather than eating Se-young's dish which is perfect in every way. Yu-kyung had already started changing his world the moment Hyun-wook found her sleeping in his locker.

That is why although Hyun-wook is the one dominating the kitchen, it is actually Yu-kyung's story that is leading on "Pasta". The sight of Hyun-wook not being able to leave out love in the kitchen, resembles the limitation many other similar dramas had. But like Yu-kyung's honest love where she does not know how to be indirect about her feelings, "Pasta" too does not try to hide the fact that the drama is actually about romance. As it has done so far, as long as "Pasta" does not try to add in any artificial flavoring in an attempt to tell what we already know, "Pasta" may linger in our memories as a romance which has the same flavor from beginning to end.

"[REVIEW] MBC TV series "Pasta""
by HanCinema is licensed under a Creative Commons Attribution-Share Alike 3.0 Unported License.
Based on a work from this source