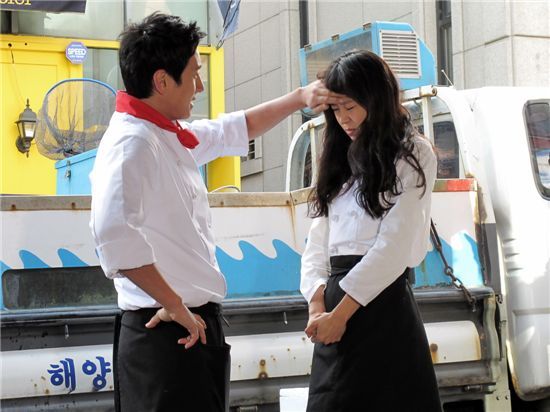 Although "Pasta" is a story about romance in the kitchen, it tries to do more than just cook up romance. There are many, various conflicts surrounding the restaurant, characters Choi Hyun-wook (played by Lee Seoun-gyoon) and Oh Se-young (played by Lee Honey) and Korea-educated versus Italy-educated cooks. Choi Hyun-wook runs when Oh Se-young enters the kitchen and the Korean clan is determined to beat the Italian clan. And it is throughout such series of events that each character in the kitchen, those who were not noticeable before, start to become more visible to the viewer. While "Pasta" might not be an eye-catching masterpiece, it has plenty of stories surrounding its two main characters Choi Hyun-wook -- who is a combination of dictator and tyrant with a black sense of humor -- and Seo Yu-kyung (played by Gong Hyo-jin) -- who is both depressing enough and sensible enough compared to the typical cheerful and spirited heroines in romantic dramas -- while offering solid visuals and music as well.

The drama proved that it had taste by not using cliche set-ups in the story. For example, when Seo Yu-kyung gets locked inside a refrigerating room, she could have kept the cooler on to uphold her responsibility as a chef and gotten hypothermia, at which point Choi Hyun-wook and Kim San (played by Alex) would both come running to save her. But "Pasta" did not play out the story in such a way. The dysphemism of Choi Hyun-wook who says "Why didn't you just freeze yourself to death?" and the honesty of Seo Yu-kyung who answers "Because I wanted to live" make for a fun dialogue, as if the characters are playing a ping-pong match. Answering a straightforward question such as "Chef, why do you play mind games with people?" with the blunt remark "Is that my fault? That is because you go from being good to bad!" is evidence that "Pasta" has invested more in its characters than other shows. What remains to be accomplished with the show, now halfway into its run, is figuring out how to solve the various conflicts within the story while maintaining the virtue that it has shown up til now.

"[REVIEW] MBC TV series "Pasta""
by HanCinema is licensed under a Creative Commons Attribution-Share Alike 3.0 Unported License.
Based on a work from this source