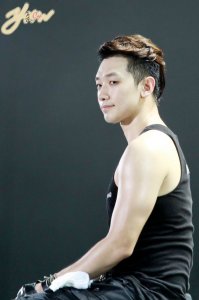 Korean pop sensation Rain has officially returned to Asian fans. The 26-year-old singer was not only back home, but better than ever.

At his show, held at MBC Dreamcenter in Ilsan, Gyeonggi Province, fans from Japan, Taiwan, China and Korea who were exclusively invited waited patiently with their small fluorescent poles shaped in the letter "R" and pieces of that read "Rainism", the title of the singer's new album.

The lights finally dimmed and Rain appeared on stage dressed in a black suit, red tie, and a new hairstyle: short and burgundy.

"Rainism" was the first song he presented to fans, along with his trademark superb dance moves. There was a change in style with a more sensual and sexy dance routine replacing his usual powerful and energetic movements.

Rain continued with "Love Story", where he stood standing on a circular platform that rose about 3 meters above the stage.

"Today's show is a bit different. (Showcases) were more like a concert and I realized I was being selfish. So this time, we'll talk more", he said to the shouting fans.

The next song "It's Raining" from his third album started with one of his trademark remarks "Come on Yo!", while his new song "Only You" graced fans with groovy soul melodies, with Rain appearing in a brown suit, matching brown leather vest and boots.

Suddenly, the LED screens around the stage displayed red rose petals flying in the wind, and a tango rhythm banged from the speakers.

Rain, who went backstage to change his outfit, reappeared, this time with a lovely female dancer dressed in a tango costume. Dancing to the music that gradually mixed with Rain's debut song "Bad Guy", the couple surprised fans with their exquisite dance moves and surprised them once again when Rain finally revealed the mysterious lady.

"I wanted to present a special performance with a famous actress. Kim Sun-a here has been practicing for the past two weeks with me for the show. Wasn't she wonderful?" said Rain.

Kim waved to the screaming fans and said that she was honored to have danced with Rain.

"I can't believe I'm on stage. It's a great honor to be standing here and the past two weeks have been a priceless memory", she said.

Rain returned on stage to sing a new funky number "Fresh Woman", dressed in a black tracksuit and big Afro wig. Catching his breath from singing and dancing, he added to his fans that he "was grateful for waiting for the past two years".

The official showcase ended with Rain and his team of dancers leaving the stage waving to fans, but he soon reappeared and offered several encores, including "How to Avoid the Sun" and "Instead of Saying Goodbye".

For Rain fans, Friday night might have been a dream come true as right after the showcase, there was a special program on MBC that showed the life of Rain for the past five months as an actor starring in the Hollywood film "Ninja Assassin".

"You know what, I hate this", Rain said between his sessions with the trainers who worked with actors for the movie "300" (2006). The show continued to show footage of the singer/actor rehearsing for the movie, preparing meals on weekends and working out between filming.

Through exclusive interviews, Rain revealed his continuous efforts and strategies in trying to make it big not only here in Asia, but also in Hollywood. He appeared in the movie "I'm a Cyborg, But That's OK" by director Park Chan-wook not only because it was a great role, but also with hopes of appearing at an international film event, which he eventually did at the Berlin International Film Festival. Discovering his soaring popularity in Southeast Asia with the drama "Full House" (2004), Rain quickly held an Asia tour and impressed Asian fans, making Hollywood wonder about the Korean singer who could also act. He also made the list of TIME magazine's 100 Most Influential People in the World list, appeared in the Wachowski brothers' "Speed Racer", signed a contract with William Morris Agency and was given the lead role in "Assassin" directed by James McTeigue ("V for Vendetta").

"I dedicated my 20s, my passion and energy to the name` Rain'. I always did my best and I thought if I did, it would eventually show and even if it didn't turn out well, I wouldn't have any regrets. The thought of my picture being hung on the walls of a Hollywood theater kept me going", he said during the show.

"Rain Finally Unveiled in Asia"
by HanCinema is licensed under a Creative Commons Attribution-Share Alike 3.0 Unported License.
Based on a work from this source