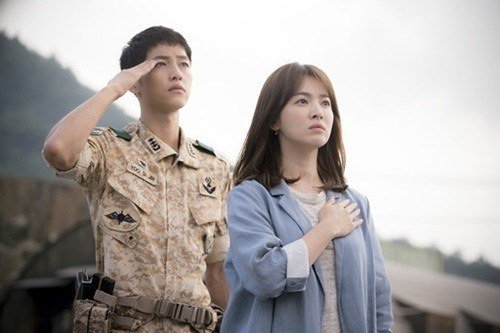 On the third episode of the drama "Descendants of the Sun" which is set to air on March 2nd, Si-jin (Song Joong-ki) is going to go past Mo-yeon (Song Hye-kyo).

The second episode showed him and the Alpha team getting off their transport plane and walking towards the medical team.

Si-jin knew Mo-yeon was coming to Uruk and recognized her but coldly walked past her.

The two of them broke up because of a difference in values regarding the sanctity of life and reunited 8 months later in Uruk.

This foresaw a start of love in an area of crisis.

A picture of Si-jin saluting towards the sun and Mo-yeon looking at it with her hand over her heart was released prior to the third episode.

"[Preview] Song Hye-kyo and Song Joong-ki reunite in Uruk"
by HanCinema is licensed under a Creative Commons Attribution-Share Alike 3.0 Unported License.
Based on a work from this source