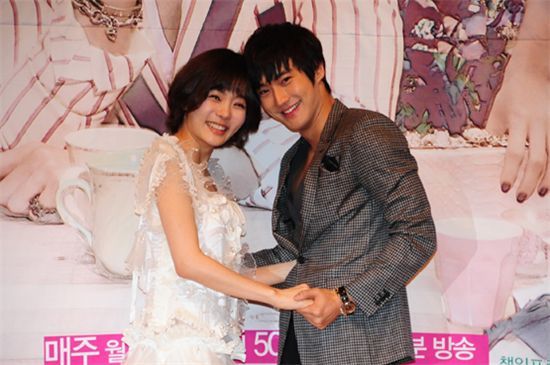 Written by: Koo Seon-yeong
Produced by: Park Yeong-soo-I
Starring: Chae Rim (as Yoon Gae-hwa), Choi Si-won (as Sung Min-woo), Lee Hyun-woo-I (as Yoon Si-jun), Park Han-byul (as Hong Yoo-ri), Moon Jung-hee (as Han Jung-ah), Bang Joon-seo (as Kim Min-ji), Kim Yoo-bin-I (as Ye-eun)
In one sentence: A popular top star with no talent, hires a divorcee to become his maid but she later becomes his manager and succeeds at both her career and in finding love.
Premiere date: March 22, 2010, 8:50 PM

"A housewife and manager are alike in that they are both good at taking care of others", producer Park Young-soo explained of the idea behind TV series "Oh! My Lady" at its press conference Tuesday. The role of both the housewife and manager includes taking care of meals, ironing clothes and giving advice in times of trouble. It means that the only difference between the two is that one is meant for the family while the other is meant for a celebrity. That is why although "Oh! My Lady" tells the story of Yoon Gae-hwa (played by Chae Rim) who becomes top star Sung Min-woo's (Choi Si-won) maid to make money is different from MBC drama "Last Scandal", despite their similar set-up. In "Last Scandal", top star Song Jae-bin (played by Jung Joon-ho) was the knight in shining armor to Hong Sun-hee (played by the late Choi Jin-sil), while the rapport between Gae-hwa and Min-woo rather reminds the viewer of the relationship between Jang Gi-jun (played by Lee Beom-soo) and Oh Seung-ah (played by Kim Ha-neul) from SBS series "On Air". That is why the world of show business in "Oh! My Lady", as shown through a musical production company which Yoon Si-jun (Lee Hyun-woo-I) is the CEO of, Sung Min-woo's casting and entertainment reporter, should attempt at depicting how one struggles increasingly harder to make a living, rather than using it as a mere setting to tell the fairy tale-like love story between a determined woman and a top celebrity. The only drama that has lived up to this standard most recently was MBC drama "Pasta". Will "Oh! My Lady" be able to give life to the realistic issues handled in this story while also showing "the fresh love story" between the top star and middle aged woman?

No more overly cheerful characters who cause trouble all the time!: 5 points
If you are hoping to see the firm and caring middle aged woman: 8 points

For the past few years in Korean dramas, the constantly cheerful and strong-willed female characters have not been received as favorably as they were in the past. If you are a viewer who has felt stifled by characters who are overly passionate and end up doing damage all the time -- namely Durumi from "Beethoven Virus", Lee Seo-jung from "Style", Lee Peong-kan from "Taming of the Heir". You may receive a similar vibe from Yoon Gae-hwa in how she talks back to Sung Min-woo saying, "Talented actors like Kim Myung-min are probably only close to other talented actors so it is unlikely he is close with you" despite having been warned from her employer to watch her mouth. And while she is ironing, she will burn a hole through Sung Min-woo's shirt after her attention gets diverted to something else. You will feel it even more when she discovers that Sung Min-woo has a daughter and uses it to get him cast for a part in Yoon Si-jun's musical. That is why the aforementioned quote from director Park is important. Yoon Gae-hwa will be acknowledged as a cheerful and strong-willed character in the positive sense when she shows she is not relentless but rather caring and trying to protect someone as if he was her family.

"[PREVIEW] SBS TV series "Oh! My Lady""
by HanCinema is licensed under a Creative Commons Attribution-Share Alike 3.0 Unported License.
Based on a work from this source