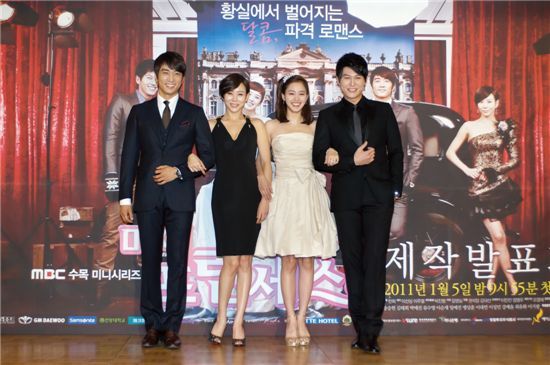 The 'cheerful and nothing-can-bring-me-down' female character meets the grandson of a conglomerate. He tries to turn her into a princess and the two fall in love. That is how you could summarize MBC's "My Princess". To add on just a little more detail, Lee Seul (played by Kim Tae-hee) is a stingy female college student who is of royal descent and diplomat Park Hye-young (played by Song Seung-heon) becomes her tutor to make her a princess per the request of his grandfather (played by Lee Soon-jae) in order to restore their imperial family.

"This production has to do well since MBC's Wednesday and Thursday mini-series have struggled over the past two years", Song Seung-heon said at the press conference for "My Princess" held on December 3. However, what is more important is what the drama means to both actors. Kim Tae-hee may be a top star but when it comes to her acting skills she has not received positive reviews and "My Princess" will test whether she has what it takes to be an actress even though her last movie "Grand Prix" was a box office failure. Also, it is her chance to show something new and appealing through this character as she portrays the loveable and idiotically charming Lee Seul, breaking away from her 'little miss perfect' image which has shown through her past works such as SBS' "Love Story in Harvard" and KBS' "IRIS". In that sense, Kim, who said she naturally pulled out the comical side to her by looking back on the clumsy and four-dimensional character she played in a mobile phone commercial, seems to have been relatively successful at the transformation as seen in scenes from the trailer where she dances to Girls' Generation's song "Hoot" and uses vegetables to cover her eyes when she sees Song's half-naked body.

Screenshots from MBC's "My Princess" [MBC]

The same goes for Song Seung-heon who takes on the role of Park Hye-young, the level-headed and elite diplomat. Even though his MBC drama "East of Eden" may have recorded high viewership ratings, his movies "Fate" and "A Better Tomorrow" were not successful or received favorable reviews and Song's "Hallyu star" image is not just a plus factor. Song has to appeal to the younger audience since he has continuously played somber and heavy and characters in the past so it was the right choice for him to take on the challenge of appearing in a romantic comedy drama for the first time. However, the right decision does not always guarantee the best results. Also as of current, it seems that his character lacks the ability to support Lee Seul's bouncy personality.

Ultimately, whether "My Princess" succeeds or not will depend on how the intimate relationship between Kim Tae-hee and Song Seung-heon progresses. The show is faced with the double problem of how there are various romantic comedy cliches placed within the drama and how it shows on the same night as SBS' medical series "Sign" which stars Park Shin-yang. Still, "My Princess" raises anticipation in that it is directed by Kwon Suk-jang, who created a new style of romantic drama through last year's MBC drama "Pasta", and was co-written by scenarists Kim Eun-sook ("Pasta") and Jang Yeong-sil (SBS' "On Air"). Will the two actors who perfectly fit the image of prince and princess be able to regain success through this drama? The first episode airs on January 5.

"[PREVIEW] MBC TV series "My Princess""
by HanCinema is licensed under a Creative Commons Attribution-Share Alike 3.0 Unported License.
Based on a work from this source