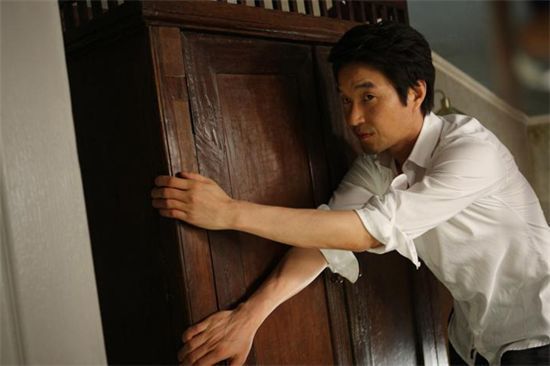 There is something fishy about Chang-in (Han Suk-kyu), a guy who rents a room in a two-story house occupied only by a mother and a daughter. Although he introduced himself as a writer he is definitely up to something given how he snoops around the house whenever he can -- as if looking for something in particular. But mistress of the house Yeon-joo (Kim Hye-soo) who is suffering from depression and insomnia at the same time and her rebellious teenage daughter Seong-ah (Ji Woo) who is going through a stormy period of her life from her obsession over the faults to her looks, will not permit Chang-in to come close by maintaining a hysterical attitude. Even the woman next door (Lee Yong-nyeo) who likes to poke her nose into others' businesses gets in his way. With time running out, Chang-in, increasingly anxious, ends up throwing himself at Yeon-joo to avoid a risky moment.

Anticipation Quotient: 8
Han Suk-kyu is back. And with the perfect role.

"Villain and Widow" is a movie that is hard to explain beforehand because it is a suspense comedy -- anything can be a spoiler that could ruin the fun of the show. So all that can be done is to repeat saying, "It's fun, it's really, really fun... but I can't tell you exactly why it is so and there's just no way to explain it". But what is certain is that this film stands out the most in its usage of an extremely sophisticated form of comedy compared to its local rivals released so far. A treasure hunt in a limited space, a mother and daughter who are a nervous wreck, and a kind-faced villain may come off as a bit too contrived yet "Villain and Widow" skillfully brings the elements together to make its audience laugh to tears. The film was directed by Son Jae-gon who became even better at handling black comedy since "My Scary Girl" (2006), making laughter break out at the most unexpected moments as the story unfolds. The movie is the result of perfect timing and chemistry of its actors rather than word play or exaggerated situations.

The reunion of actor Han Suk-kyu and actress Kim Hye-soo who appeared as lovers in the film "Dr. Bong" (1995) 15 years ago is another interesting point to watch in particular. Every small line they say and the details to their facial expressions that evokes laughter proves they are still at the height of their acting careers.
Chang-in who struggles to seduce Yeon-joo but reveals his rough nature at some point of the story once again reminds viewers of Han's wide spectrum of acting. Kim Hye-soo too knows how to pull off the ill-tempered and idiotic character Yeon-joo, playing the part to a subtle point in a convincing way. Supporting actors such as Kim Gi-cheon, Lee Yong-nyeo and Uhm Ki-joon also guarantee there will be much to laugh about in the film despite their short appearance. Nonetheless, the best news that "Villain and Widow" brings to you is that actor Han is back. The movie premieres on November 25.

"[PREVIEW] Film "Villain and Widow""
by HanCinema is licensed under a Creative Commons Attribution-Share Alike 3.0 Unported License.
Based on a work from this source