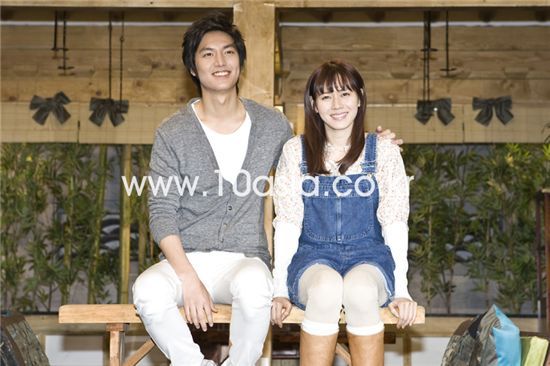 From left, actor Lee Min-ho and actress Son Ye-jin pose during a press conference for MBC TV series "Personal Preference" at the public network's outdoor set in the city of Yongin of Gyeonggi Province, South Korea on April 13, 2010. [Lee Jin-hyuk/10Asia]

"Personal Taste", about a man pretending to be a homosexual in order to become roommates with a woman who wants to live with a gay male friend, was like welcomed rain on dry ground -- a light romantic comedy amidst the flood of grand historical dramas family destruction stories. News of the main cast amplified viewers anticipation for the show; Lee Min-ho was taking on a role for the first time since appearing in the hit show "Boys over Flowers" early last year and Son Ye-jin was to play the most comical character she had ever taken on since her debut.

A press conference held Tuesday on the set of "Personal Taste" revealed that the actors' expectations for the show ran as high as their fans'. Below are excerpts from the event attended by Lee and Son.

Q: We heard you'll shoot a kissing scene today. Is there anything you prepared in particular for it or expect of?
Lee Min-ho: I prepared mint candy for the scene.
Son: It's where the melodrama element to the show starts to surface, the episode where the two suddenly become an item while in the process of becoming friends. A slightly drunk Jin-ho kisses Gae-in who is consoling him.
Lee: To put it more correctly, it's not a kiss but a peck.

Q: There must have been a lot of interesting occurences because there are a lot of comical scenes in the show.
Son: There are a lot of comic-like elements and the drama itself is funny. Gae-in is a character who uses large movements and expressions, just like someone from a comic book, but Jin-ho is the typical silent and dry guy. So Lee wasn't too sure of how to express how his character responds to a sloppy woman. He would actually want to play along but can't and instead maintain his character's tone. So I crack myself up, at my own acting by making bloopers, and the acting by the supporting actors is so great that I never stop laughing. We all have great chemistry.
Lee: I too want to laugh while showing my teeth but there aren't any scenes I can do that so it's tough.

Q: Jin-ho is someone who shows different sides to him depending on who he is with. When is it most difficult to play his role?
Lee: It's easiest when I'm with character Sang-joon (played by Jung Sung-hwa) because I can just let go but I still feel a bit uncomfortable showing him working. I need to show that he's professional and hard-working but I think I myself just lack in that aspect. I was also concerned over how to set my character's tone for when he is with Gae-in because I was worried I would ruin the character by reacting too much too her. I think that the more memories I make with Gae-in, the more comfortable it'll become.

Q: Son, you have to ruin your image a lot to play the role of Gae-in. How have people around you responded to this?
Son: I don't actively seek out responses from people while working on a role. The head of my agency was quite worried to begin with (laugh) and there were even some people who said they didn't know I was Gae-in after the first episode went out. I perceived Gae-in as someone who is a complete fool when it comes to dating, is very dirty and can't do anything. I thought of her as an outsider and egoist, unlike the large house she lives in, and with many otaku-like qualities so I came up with the exaggerated set-ups such as her wearing horn-rimmed glasses and pinning her hoodie behind her ears. Some people responded by asking if it was really necessary to go that far but I wanted her to be different from any other characters seen in dramas so far, so I wanted her to look like a girl who hasn't washed her feet for a week and someone who wears the same clothes for going to bed and everyday life. Making the drama fun for viewers is important but I think you'll increasingly be able to feel more sincerity and reality as Gae-in's wounds emerge. 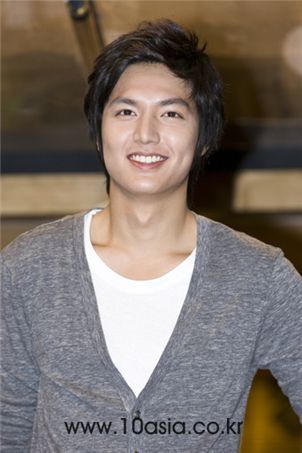 Q: Some fans are worried that you are ruining your innocent image.
Song: Well, I'm guessing I'll get it back when I take on an innocent role. (laugh)

Q: Lee, you too gained a lot of attention by ruining your image in the diarrhea scene.
Lee: I was very embarrassed because it was the first time I'd taken off my pants in front of so many people.

Q: What meaning does "Personal Taste" have to you, Lee?
Lee: It's significant to me in many ways because it's the first role I've taken on after "Boys over Flowers" and the first time I've taken on an adult character. I think this drama will be a show where I can show my potential to grow while also serving as the basis to me playing new roles in the future.

Q: Your character from "Boys over Flowers" seems similar to your character in this show in that both are not quite the agreeable type. What are the characteristics you have set for the current role you're playing?
Lee: My current character Jun Jin-ho is unkind. But he is upright at heart and has good manners so he has an unkind politeness. He won't nag at just anyone... I'm trying to show him as someone who is unkind when he thinks he's in a situation where he's suffering damage. And I think I'm more at ease than compared to when I was shooting "Boys over Flowers". I was asked a lot whether I felt pressured in starting a new drama but I actually wasn't feeling that pressured. I believe I'll get better over time too.

Q: Son, you've changed 180 degrees from the role you played in your previous film "White Knight".
Son: That's why I took on this drama. Actors act with their heart for a role so I was very depressed and had a hard time after filming "White Knight". That's why I told myself that I should take on a role that fits my age, is fun and one that I would have fun with on set. I'm the same age as my character Gae-in, 29, so I wanted to enjoy the last of my twenties by doing something more fun and young.

Q: Have you been watching the show on television? What do you think?
Lee: I watched the first two episodes but haven't been able to watch the two episodes after that because we've started to really crunch shooting for the show.
Son: That's why I've been watching it whenever I can on my mobile phone. I'm always critical about the roles I play so I always notice the parts I lack in first. What I'm sure of is that the third and fourth episodes were more fun than the first two. I think the main point as issue will be in figuring out how to unravel the original novel which is refreshing and fun into a 16-part series. In that aspect, it's important to know whether my character will maintain her foolish image or change. I think this week and next week will be crucial.
Lee: I think all of the dramas I'm in have been fun. (laugh) They're fun when I watch them the first time but I also become frustrated when I start noticing the parts I lack in. I try to improve but I think pronunciation is the biggest issue for me. I also think I don't quite blend into the drama.

""Personal Taste" will gain flavor, says Son Ye-jin - Part 1"
by HanCinema is licensed under a Creative Commons Attribution-Share Alike 3.0 Unported License.
Based on a work from this source