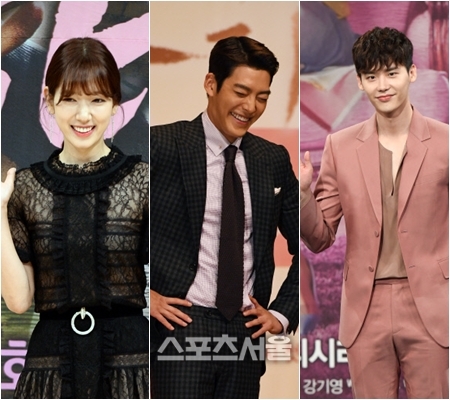 Park Shin-hye co-starred with Kim Woo-bin in SBS 'Heirs' and with Lee Jong-suk in SBS "Pinocchio" previously. Kim Woo-bin and Lee Jong-suk also co-starred in KBS 2TV's 'School 2013'. As the three friends, who worked together in the same dramas previously, and each of them headline the recently started dramas during the similar time period, their appearance and the dramas are drawing attention.

The one who went first was Park Shin-hye. She conquered the Monday & Tuesday dramas with her role Yoo Hye-jeong, in SBS "Doctors", which premiered on June 20th. This is her drama comeback in one year and six months since her appearance in SBS "Pinocchio", She shows off the sweet chemistry with Kim Rae-won, which majorly contributed to the dominance among the Monday & Tuesday dramas.

Following after the success of Park Shin-hye with her Monday & Tuesday drama, Kim Woo-bin and Lee Jong-suk are competing directly during the same airtime. As Kim Woo-bin's "Uncontrollably Fond" premiered on July 6th started off at a better place earlier, Lee Jong-suk is chasing closely after his best friend with "W", which started two weeks later.

Park Shin-hye secured the first place among Monday & Tuesday dramas. Lee Jong-suk's "W" is right behind Kim Woo-bin's "Uncontrollably Fond" by the tight 1.6% (Nielsen Korea, nationwide). The best friends are competing with each other.

"Park Shin-hye, Kim Woo-bin, Lee Jong-suk: Three friends dominate weekday dramas"
by HanCinema is licensed under a Creative Commons Attribution-Share Alike 3.0 Unported License.
Based on a work from this source