Park Shin-hye in "The Heirs" 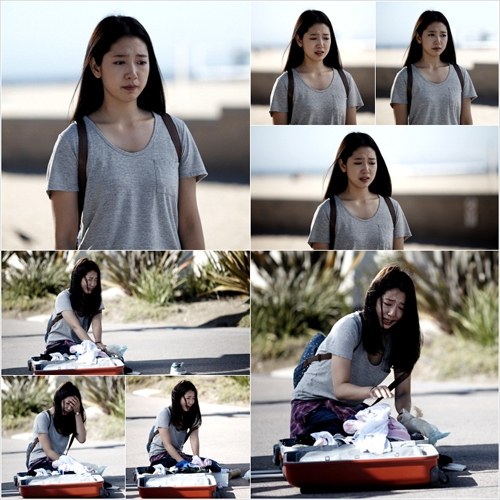 Park Shin-hye has become the queen of crying act.

Park Shin-hye was seen crying at Huntington Beach in LA on the 16th last month. She's crying her eyes out, sprawled on the street with her suitcase lying in front of her. She looks almost pitiful.

Apparently, Park Shin-hye started crying 5 seconds after the 'cue' sign was given. She didn't sob but just dropped tears and picked up the things she dropped.

Park said, "I felt how Eun-sang must be feeling in the script and felt sad for her. I did my best to show how much I pitied her". The production company spokesperson says, "Park Shin-hye is cheerful on set but when the camera starts rolling she becomes a professional. She's good enough to be talked about".

"The Heirs" is broadcasted for the first time on the 9th. It is a romantic drama about the lives of wealthy kids and a poor girl. Park Shin-hye takes on the role of Cha Eun-sang, a hardworking girl who never lets anything put her down even in times of hardship.

"Park Shin-hye in "The Heirs""
by HanCinema is licensed under a Creative Commons Attribution-Share Alike 3.0 Unported License.
Based on a work from this source