Over 200 Million Movie Tickets to Be Sold This Year 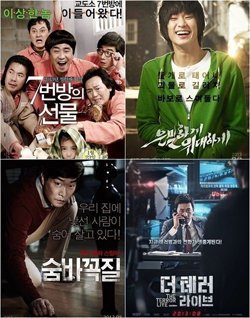 The total number of movie tickets sold in Korea is expected to hit the 200 million mark for the first time this year.

According to the Korean Film Council on Monday, the figure had already 199.33 million as of Sunday. Given that 200,000 to 300,000 people watch films in theaters on weekdays, the figure will likely surpass the milestone this week.

It translates into every Korean watching an average of four movies in the cinema per year.

The increase is mainly attributed to the popularity of Korean films. Last year it took until December to sell 100 million tickets for Korean films, but this year the record was set a month earlier.

The exceptions are Hollywood blockbusters "Iron Man 3" in fourth with 9 million viewers and "World War Z" in 10th with 5.23 million.

"Over 200 Million Movie Tickets to Be Sold This Year"
by HanCinema is licensed under a Creative Commons Attribution-Share Alike 3.0 Unported License.
Based on a work from this source