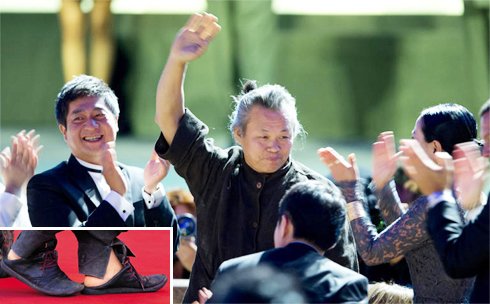 "Pieta", Kim Ki-duk's tale of violence and poverty, won the Golden Lion at this year's Venice film festival. Kim spent just W100 million (US$1=W,130) making the film, a fraction of the average cost of a Korean film these days.

This is the first time a Korean film won the top prize at one of the world's top three film festivals at Venice, Cannes and Berlin. Accepting the prize, Kim thanked the actors, staff, film festival officials and Italian fans before bursting into a rendition of the traditional Korean song "Arirang".

Kim said he sang the song because he wanted to show people around the world about something essentially Korean.

Kim (52) wore a pair of worn-out shoes and hanbok or traditional Korean dress modified for comfort when he stepped on stage. The outfit looked grungy in the grand surrounding next to festival president Paolo Baratta, who sported a tuxedo. Kim lives in a cottage deep in the mountains without plumbing or a kitchen and pitches a tent in the house in the winter to ward off the cold.

He only completed junior high school. Since debuting with "Crocodile" in 1996, Kim has been an outsider in the movie industry with no training or experience in the business. His early films were criticized as amateurish and crude due to their lack of technique. With the exception of "Bad Guy", which attracted 700,000 viewers, most of his films were unpopular in Korea and he had a hard time finding investors to finance them.

If he attracted any notice it was of the negative kind, for extreme violence and alleged misogyny in such films as "The Isle", or "Address Unknown", which show a woman mutilating herself, and "Bad Guy", where a college girl is kidnapped and sold as a prostitute.

The dialogue is often raw and crude. "A common characteristic of Kim's movies is that good and bad overlap or switch places", said movie critic Oh Dong-jin. "It's rare to find characters in Korean movies who are neither bad nor good". 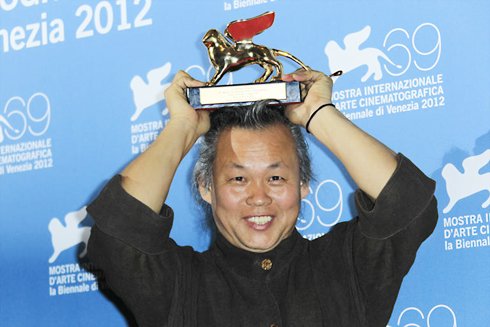 Kim remains on the fringes of Korea's movie scene. Not only do audiences stay away, critics are also divided. When "The Bow" drew a mere 1,000 moviegoers in 2005, Kim vowed never to release a movie in Korea again. He was once arrested by police who mistook him for a homeless man a year after he won the best directing awards at the Berlin and Venice film festivals.

But abroad he has a solid reputation, especially in Europe, where critics habitually rave about his genre-busting work. There is more freedom of expression there and his radical themes are seen as refreshing. Oh said the Asian mentality that pervades the films also helps. "The ethical ambiguity of Kim's characters and their strange ways of expressing themselves are viewed as exotic in Europe", he added.

"Outsider Kim Ki-duk's 'Pieta' Wins Top Prize in Venice"
by HanCinema is licensed under a Creative Commons Attribution-Share Alike 3.0 Unported License.
Based on a work from this source