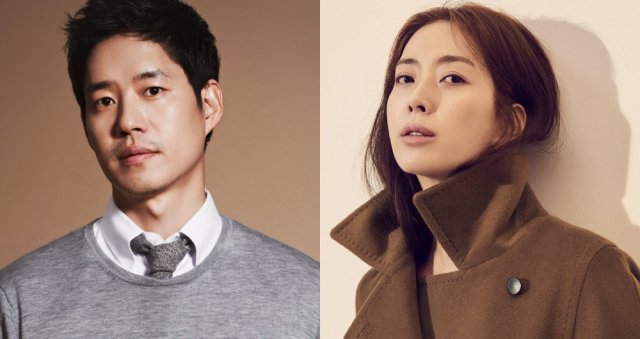 While waiting for Dramaland to give me some happy 40s+ romances without terminal illness or murder, I take what I can get. If what I can get are Yu Jun-sang and Song Yoon-ah together, then I can't really complain. The two actors are positively reviewing their starring role offers for the upcoming mystery drama "Elegant Friends".

According to an exclusive piece with now debunked casting confirmations, the drama depicts the crumbling of the peaceful everyday lives of a middle-aged man and his friends. A friend is killed and the protagonist's wife is the suspect to her lover's murder, said lover probably being the aforementioned friend. Ouch.

The following character information is from the same debunked piece, so take it with a tiny grain of salt. Goong-cheol is described as a man with ambition to succeed, and the spite and passion to achieve what he wants. He grew up witnessing his mother's loneliness under the oppression of a patriarchal father, and has grown into a romantic person who is good to his wife, believing that he will not become such a man himself.

Jeong-hye is described as a woman who may seem like a chic and cynical perfectionist, but is actually just someone who craves love. It looks like Goong-cheol was sadly not as good at conveying said romanticism after all. Jeong-hye, who believes that she has no love left, is instantly shaken when she sees the director of a play at a university theatre festival.

While there is no broadcasting station or release date decided yet, "Elegant Friends" will be helmed by PD Song Hyeon-wook of works such as "Beauty Inside - Drama", "Introvert Boss" and "Oh Hae-Young Again", and penned by Park Hyo-yeon of short drama "Yeong-joo", possibly paired once more with its co-writer, Kim Gyeong-seon.

It's not my 40s+ romantic comedy without serial killers that's taking forever to get, but it will have to do for now. I just want these two on my screen in a good work. That being said, give Song Yoon-ah a hot, good man's character without caveats, you cowards!