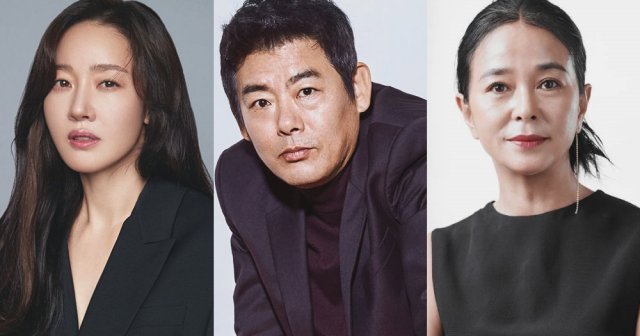 It's a good day in Dramaland when seasoned actors team up with inspired creators. It's a good day for yours truly when the premise sounds this exciting. Uhm Ji-won, Sung Dong-il and Jo Min-soo are officially on board "The Cursed", tvN's upcoming drama written by "Train to Busan" director and writer Yeon Sang-ho.

"The Cursed" is a mystery thriller about Im Jin-hee, a righteous reporter trying to uncover the secrets of Korea's largest IT company, Forest, meeting So-jin, a strong-spirited girl with special abilities, and fighting injustice.

Uhm Ji-won ("The Odd Family: Zombie On Sale", "Spring Turns to Spring") has confirmed her role as Im Jin-hee, a reporter of great conviction and passion. Jin-hee discovers the existence of a suspicious subsidiary after being assigned to an assault case that happens within the Forest company.

Sung Dong-il ("Miss and Mrs. Cops", "Trap - Drama") will reportedly make a drastic transformation as Jin Jong-hyeon, the chairman of Forest. He is someone who relies on shamanism after making a successful comeback through a ritual. This is definitely an interesting change of pace for an actor we're so familiar with in more approachable roles.

Also affiliated with Forest, Jo Min-soo ("The Witch : Part 1. The Subversion", "Goddess of Marriage") plays Jin Kyeong, the head of Forest's subsidiary, a 'spiritual consulting' firm. That doesn't sound suspicious or odd at all, does it?

There's nothing about this series that doesn't sound great so far, so I look forward to more news from it. "The Cursed" plans to film in the second half of 2019 with a release date in the first half of 2020, so I hope that this will be a case of pre-production done right and, above all, safely.