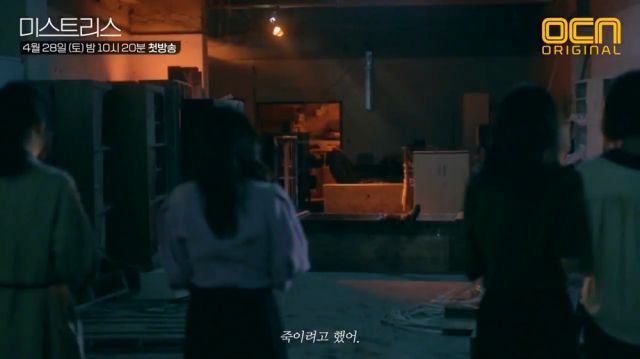 It looks like the ladies of "Mistress" have a lot to hide, some of it being in the form of a dead body. The main teaser for the upcoming sensual mystery thriller has been released, and we get a closer look at its gentlemen, and the grim secrets behind its heroines' connection.

There is definitely a murder most foul involved, as there is a body, and a direct admission of it thrown around. "We killed a man last night" is quite an opener, and it only gets worse. A young man named Seon-ho (Jung Ga-ram) is looking for a woman he wants to kill, but the women seem to have beaten him to said deathage. Maybe the man is out for revenge.

Heroine Jang Se-yeon (Han Ga-in) shows no remorse about the whole thing, putting a stop to the panic-induced complaints of her co-conspirators by reminding them that the man, pressumably the dead man, deceived them and tried to kill them. She coldly states that they should suck it up and deal with the situation. It seems the clean up job might not have gone well, which the heroine herself has doubts over.

This is certainly a turn of the premise I'm most thankful for, because if a leading cast of women in a thriller is cool, a leading cast of villainous, or at least murderous women is even better. This series went from a "meh" to a "give meh" quite fast for me, and I look forward to its intrigue, assuming we'll get to see it sometime soon, Netflix be willing. "Mistress" will be premiering on the 28th of this month on OCN.