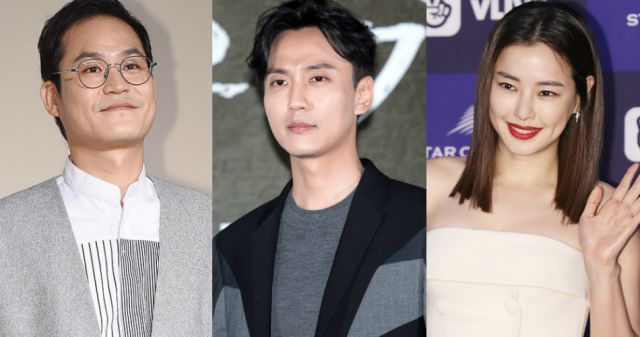 I don't think I can scream "TAKE IT!" harder over a potential cast, because Kim Nam-gil, Kim Sung-kyun and Lee Honey teaming up to wash the law and religion of all sins sounds like too beautiful a dream. The dream might be turning into a reality, as all three actors are now positively considering their role offers.

"The Fiery Priest" follows a priest with anger management issues and a detective who collaborate to solve the murder of an elderly priest. The drama will handle topics like the exploitation of welfare organizations, pseudo-religion and sexual harassment within religious organizations. Rather than relying on sensationalism, it will use a comedic, human approach to deliver fun emotions and catharsis.

Kim Sung-kyun is being courted for Goo Dae-yeong, a detective in the violent crimes division of the Gudam Police Station. He is a man who bluffs by talking fancy, because he doesn't want to appear weak. He's slow-witted, gets easily moved to tears, and has a good heart. I love him already. The once capable detective has become cowardly since losing his partner three years ago. A cinnamon roll with trauma. Be still, my heart.

Lee Honey is being offered Park  Kyeong-seon, a prosecutor at the Special Investigations team of the Seoul District Prosecutors' Office. She's capable, thorough and she doesn't make waves. She has almost superhuman political power, and is a sensible, beautiful woman. She is strong to the weak and weak to the strong, and has good awareness of her position's significance. It all sounded great up until that boot licking, and I can't wait for this boss.

Both actors have confirmed that they are positively considering the offer, while Kim Nam-gil's agency has stated that nothing has changed since June, meaning that he has also not confirmed things yet. His character is still described as a former special forces agent with several disorders. Can this cast become reality already? Please and thank you. "The Fiery Priest" will be premiering in January on SBS.