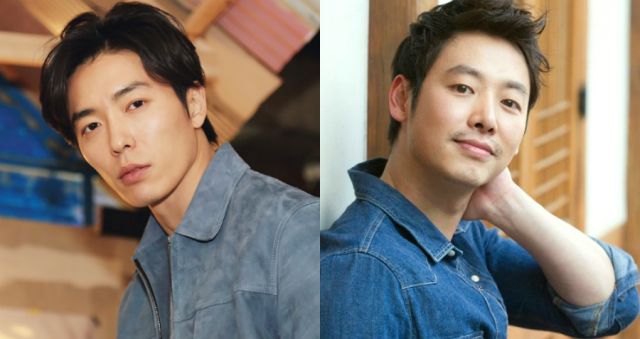 Two folks in this group are certainly the most publicly desirable duo to work-elope after "Voice" and make something new together, and if Kim Dong-wook joins them, I can already hear the happy fan-cries. According to reports, Kim Jae-wook and Kim Dong-wook might be taking on leading roles for Kim Hong-seon-I's upcoming religious-themed drama, "The Guest - Drama".

"The Guest - Drama" (also reported as "The Guest - Drama") is a drama about a psychic, a priest and a detective who tackle crimes committed by strange powers in the country. It's touted as a genre drama about shamanism and exorcism, which I'm guessing is OCN's latest way of trying to diversify the all-crime-all-the-time fame that the station has.

Kim Jae-wook is being courted for the role of the priest, while Kim Dong-wook for the psychic detective. If Kim Dong-wook accepts, he will reportedly be playing Yoon Hwa-pyeong, a man who had psychic powers since childhood, and who lost his mother and grandmother when the prayers to stifle his gift failed and he became possessed. Hwa-pyeong retains his psychic abilities, and he is the first out of the three leads to know when someone is possessed.

Kim Jae-wook will be playing Choi Yoon, also known as Matteo. He acts as an assistant to exorcisms, but he's not formally a priest. If Hwa-pyeong has as fiery personality, Choi Yoon's is like ice, as the man doesn't have major emotional ups and downs. Because of that, he comes across as someone who lacks humanity.

Kim Jae-wook's agency has been quick to clarify that the actor is only considering the offer among other works, while Kim Dong-wook's has stated that the actor is positively considering. This means we might be getting a "Coffee Prince" reunion aside from a "Voice" one for the former and PD Kim Hong-seon-I. For now we're on standby and hoping, adding the hope of this casting working out onto the hope that the "Entourage" writers in charge of "The Guest - Drama" aren't going to be as disappointing this time around.