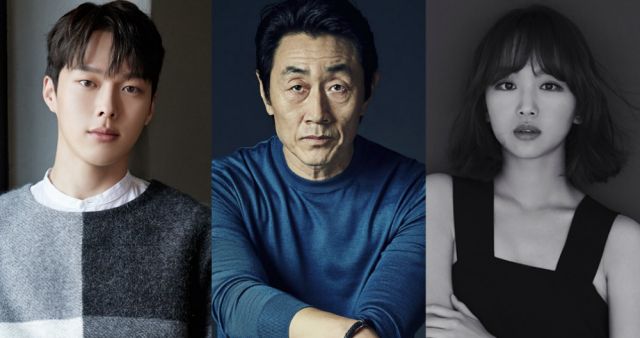 We're quite used to love triangles, but a murder one is definitely on the rarer side. Jang Ki-yong, Heo Joon-ho and Jin Ki-joo have confirmed their appearances in drama "Come and Hug Me", a story about a romance developing under the shadow of a serial killer and a tragic past.

"Come and Hug Me" is a story about a man and a woman who have lived apart following a murder incident in their shared history. It's a story that revolves around people looking for hope and healing in an imperfect relationship.

Said healing will take a lot of work, especially given the fact that Heo Joon-ho is playing a bloodcurdling serial killer who is probably still at large, and who I'm guessing is the same one who ruined the lives of the other two leads in the first place. It is reported that he will be the key figure between the other two characters. Director Choi Joon-bae ("The Greatest Couple", "Rascal Sons") has stated that he could only think about Heo Joon-ho for this role, and that he knows the actor will lead his juniors well.

As previously reported, Jang Ki-yong will be playing police officer Chae Do-jin. The director has stated that he met with the actor many times, showing confidence in wanting to cast him for the role. Newly added Jin Ki-joo will play an actress who lost her parents, which probably refers to the murder incident that separated the two non-murderous leads. Despite of this tragic past, the woman tries to live fully and cheerfully.

Now that the main cast is in place, we can get the ball rolling on "Come and Hug Me", which is slated for a May release on MBC, following "Let's Watch the Sunset". This sounds a bit "I Hear Your Voice"-esque, and although the writer does not have much of a work history in dramas, I will be following this one's development.