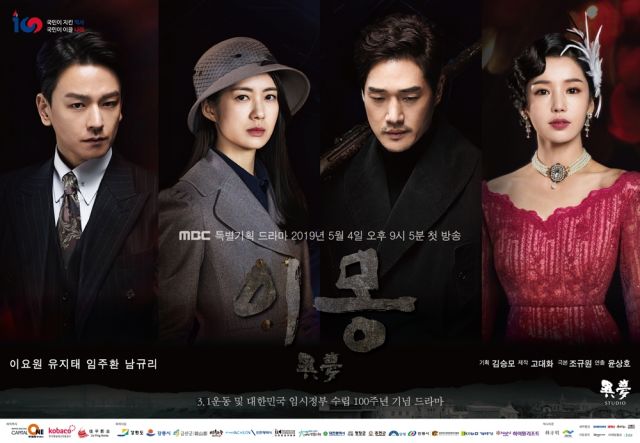 As MBC's upcoming commemorative drama, "Different Dreams", gears up for its May 4th premiere, the promotional goodies have started slowly, but surely, popping up. The latest is a stylish 4-person poster showcasing the drama's 30s visuals, but also the troubles and emotions brewing beneath the glamorous surface.

"Different Dreams" is being created as a special project for the 100-year anniversary of the forming of the Provisional Government of the Republic of Korea. Lee Yo-won ("Avengers' Social Club", "My Little Brother") plays Lee Yeong-jin, a Japanese-raised Korean surgeon and fighter for the Korean Independence Army, and Yoo Ji-tae ("Money", "Mad Dog") plays Kim Won-bong, the army's leader.

Our second leads are Lim Ju-hwan ("Bride of the Water God 2017", "Because I Love You") as Fukuda, a Japanese prosecutor at the Joseon Governor General's Office, and Nam Gyu-ri ("A History of Jealousy", "Children of Nobody") as the captivating and dignified Miki, a jazz singer at a club in Gyeongseong (former name for Seoul).

Despite their neat appearance, their expressions betray their role in the events of their time. From Yeong-jin's determined stare to Won-bong's averted eyes lost in thought as he shoulders his rifle, the true conditions of their lives are loud and clear. While I have mixed feelings about the project due to my disappointing experience with writer Jo Gyoo-won's previous works, I hope "Different Dreams" lives up to its potential.