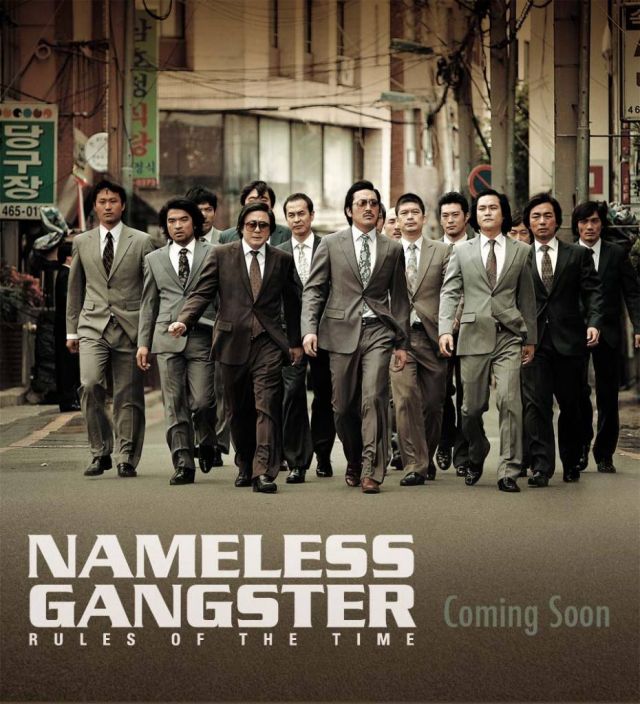 "My reason for wanting to tell a story from the '80s is because I feel that the current societal climate is very similar. About 3 years ago I got a feeling that the era of my deceased father was suddenly coming back, an era in which everyone's good will is only reserved for their own survival and well being. But like my own father, I did not see these people as selfish fools, but sympathized with them. I wanted to portray these characters not as criminals who were on the wrong side of the law, but as people who tried their best to survive and thrive despite the conditions they were in. People innately follow the times they live in and those who ride it architect the next generation. The '80s in South Korea were an incredibly volatile decade in which a single person's decision could change the direction of an entire era. Following men who lived through that decade, I wanted to show that the eighties had more dramatic appeal than any other decade. I wanted to inquire whether it was the times that were changing the people, or if it was the people that were changing the times. Most of all, I hope that the audience can laugh and identify with these men who lived like kings in the face of loyalty, betrayal, and ambition".

1982, Busan, South Korea. Ik-hyun (Choi Min-sik) is a corrupt customs officer on the verge of getting fired for bureaucratic reasons. He decides to go out with a bang when he comes upon a motherlode of heroine and in an attempt to sell it to Japan, he partners up with Busan's top gangster boss Hyung-bae (HA Jeong-woo).

A boss of wits and a boss of fists, out to take over Busan!

Ik-hyun immediately wins the trust of Hyung-bae with his ability to solve problems and talk his way out of sticky situations. With Hyung-bae's back alley prowess and Ik-hyun's lobbying skills, the two men begin to take over the coastal city. Their golden era begins to dawn.

Fighting to become the top dog

With the 90's comes the announcement of a new government war against crime, and cracks in their brotherhood start to appear. Each of the partners begins to look for the right moment to backstab the other and take over the syndicate. Who will rise to the top and have the last laugh?

In an era of loyalty and betrayal: the mob boss ascends.

The film opens with historic footage of South Korean President Roh Tae-woo declaring war against organized crime in October of 1990. Crime boss Ik-hyun is swarmed by a pack of hungry journalists as he is led into the prosecutor's office. The story flashes back to 1982 and reveals in just a short decade, how an ordinary civil servant became the boss of one of the largest organized crime syndicates in Busan, South Korea's second largest city. Ik-hyun has vision, and his plan for taking over the coastal city of Busan is at times romantic and appealing, violent and vile. It's an era of power and money, where justice and order took a backseat. "Nameless Gangster" captures the essence of this volatile period in South Korea.

When it comes to casting, there are certain matches that spark tremendous anticipation and curiosity for the chemistry that will be shown on screen when two legendary actors are brought together. Such was the case for Choi Min-sik and HA Jeong-woo, two actors best known around the world for their roles in acclaimed films "Old Boy" and "The Chaser", respectively. Despite CHOI and HA's well-known roles as serial killers, "Nameless Gangster" is a noir film with a charming dose of humanity used to tell the tale of an illustrious era and the well-groomed mobsters that brought it about.

An ensemble of supporting actors who allow the villains to shine!

Choi Min-sik and HA Jeong-woo's performances are further elevated with a talented ensemble of supporting roles. "Nameless Gangster" is lucky to have several important actors in key supporting roles, including Cho Jin-woong as Hyung-bae's chief competitor, Ma Dong-seok as Ik-hyun's honor-bound right hand man, Kim Sung-kyun as Hyung-bae's main go-to henchman, and finally Kwak Do-won as the unflinching prosecutor who will go to extreme lengths to bring down the organized crime syndicates in Busan. This colorful group of actors comes together to add flair to the story and the '80s background, and spurs the two stars to rise to the top of their game.

ABOUT THE CAST AND CHARACTERS

Taking bribes, smuggling contraband--there's nothing he won't do for his family. On the verge of getting fired, Ik-hyun is exposed to the seedy underbelly of Busan via Hyung-bae's crime organization. Known as 'godfather' to those close to him, Ik-hyun utilizes his natural-born lobbying skills to rise to the top of food chain. His thirst to survive and instincts are second to none.

From comedy to contemptuous wretch, an actor of diverse range

"I Saw the Devil" marked CHOI's first film production in 4 years and return to form with his trademark intensity. For his role as Ik-hyun in "Nameless Gangster", CHOI shed his vicious image and gained over 10kg, complete with a hairstyle that made him look like just another ordinary man in the neighborhood. . Unlike his previous roles as Kyung-chul in "I Saw the Devil" and Dae-soo in "Old Boy", CHOI as Ik-hyun plays a deceitful but equally genial character. An actor with a wide spectrum of skills and abilities, his involvement with this film is a tremendous boon.

"A student is only a student when he studies. A gangster is only a gangster when he fights".

In Busan, only one man commands the city despite his relatively young age. He's been betrayed by those close to him enough to never trust another soul, but when Ik-hyun comes along and discovers that they're distantly related, Hyung-bae slowly opens his heart and makes him his partner-in-crime.

Having been catapulted to fame with his role as a serial killer in "The Chaser", HA Jeong-woo is now a household name in Korean cinema. The actor has tackled a variety of genres, ranging from comedy, thriller, to melodrama, and experimented with both blockbuster and art house projects. Unlike many rising stars his age, HA has sought to develop his career through many unique and independent films. Cult movies like "The Fox Family" and Kim Ki-duk's independent film "Time" are examples of his rebellious choices, refusing to be co-opted into the mainstream.

"Hyung-bae, I'm not the same snot-nosed kid who used to light your ciggies".

Rising to his own prominence after growing up in the same gang as Hyung-bae, Pan-ho was always the second in line. Despite his title as the big man in his own gang, he can't compete one-on-one with Hyung-bae. He approaches Ik-hyun and tries to seduce him into his organization in order conspire against Hyung-bae.

2011 could be marked as the breakthrough year for the actor Cho Jin-woong, who became a hot commodity after appearing in the period TV drama 'Deep Rooted Tree' as Chosun era's fiercest and most dangerous swordsman. In "Nameless Gangster" he faces off with HA Jeong-woo's Hyung-bae to become the number one gangster in Busan.

"But I'm righteous man. How do you expect me to work in a night club?"

Originally a taekwondo master and coach, Kim is dragged into the dark world of organized crime when Ik-hyun recruits him as his muscle during his rise to the top. He possesses the face and fists of a gangster but he is really not cut out for the harsh world of crime. He stirs the relationship between Ik-hyun and Hyung-bae when he clashes with Hyung-bae's right hand man Chang-woo over a trivial matter.

"I don't care if you're a real gangster or not… You're a criminal if I say so".

Infamous among the gangsters as the prosecutor who doesn't budge with bribes and seduction, prosecutor Jo goes strictly by-the-book. Even Ik-hyun's lobbying skills come to a stand-still in the face of prosecutor Jo. Can he bring down the entire network of syndicates in Busan?

At the tender age of 25, director Yoon Jong-bin made his directorial debut with the international sensation "The Unforgiven", tackling the subject of mandatory military service in Korea, something that all Korean men endure but had rarely been portrayed in films before with such realism. Having completed the film as a graduate project in school with an almost non-existent budget, the "The Unforgiven" was invited to the Busan Int'l Film Festival that year and with its acclaim was invited to Cannes' Un Certain Regard. His second feature film "The Moonlight of Seoul" brought the reality of Seoul nightlife to the screen, staying true to YOON's modus operandi of having films depict the familiar reality in a new light. With his third feature "Nameless Gangster", YOON brilliantly illustrates an era during which he sincerely believes anything and everything could happen and did. "Nameless Gangster" has been a runaway success in its Korean release with uncharacteristic love shown for the film by hardbitten men in their 40s and 50s who lived through the era. The still young director's path to the growing firmament of Korean international stars seems to becoming well established.

""Nameless Gangster" released in North America"
by HanCinema is licensed under a Creative Commons Attribution-Share Alike 3.0 Unported License.
Based on a work from this source