"Moonlit Winter" Kim Hee-ae VS. "The World of the Married" Kim Hee-ae 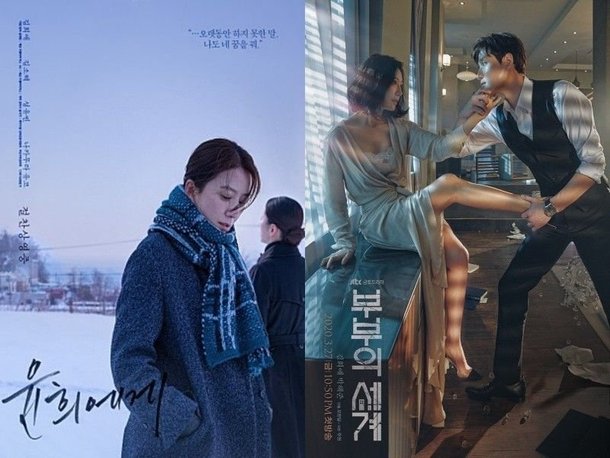 Actress Kim Hee-ae, who plays an unrivaled character with her solid acting skills is said to be 'one can't go wrong with' for her intense performance in "The World of the Married".

Kim Hee-ae, who is said to be the 'key to the success of an affair drama', previously captured people's attention by portraying fond memories of her first love through the movie "Moonlit Winter".

Kim Hee-ae has played characters who steal men with families or fall in love with other men in dramas "My Man's Woman", "A Wife's Credentials" and "Secret Love Affair".

However, in "The World of the Married", she's playing the opposite role. Kim Hee-ae takes on the role of Ji Seon-woo, who is devastated because of her husband, Lee Tae-oh's (Park Hae-joon), affair.

Kim Hee-ae showed delicate emotional performances in the process of executing her revenge after questioning and confirming her husband's affair.

In last year's film "Moonlit Winter" Kim Hee-ae played Yoon-hee, who leaves for Otaru, where snow fields unfolded, in search of a secret memory of her first love, recalling her first love she had forgotten by chance in a letter that came to her.

In "Moonlit Winter" Kim Hee-ae portrayed various forms of love while visiting her first love. It sent a message that it doesn't matter what form of love it is beyond borders and gender.

The combination of the actor and the character in "Moonlit Winter" was so perfect it was said to have been 'made for Kim Hee-ae'.

Kim Hee-ae gained people's sympathy through her realistic acting and her grim acting of appeasing the wounds in her heart.

The subtle eyes, restrained emotions and voices that change with the passage of time also matched the calm atmosphere of Otaru, in which it snows.

Kim Hee-ae's performance in "The World of the Married" is 'kind faced with bad attitude'. Kim Hee-ae plays Ji Seon-woo, who has an elegant face but is more meticulous and scheming than anyone else.

Kim Hee-ae shows the shock and anger of Ji Seon-woo, who was betrayed by her husband. She is blood-stained, revealing the affair between Lee Tae-oh and Yeo Da-kyeong (Han So-hee) and does not hesitate to fight with Lee Tae-oh.

""Moonlit Winter" Kim Hee-ae VS. "The World of the Married" Kim Hee-ae"
by HanCinema is licensed under a Creative Commons Attribution-Share Alike 3.0 Unported License.
Based on a work from this source