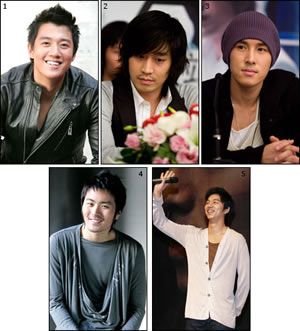 This year, some of the hottest male stars in Korean entertainment will temporarily leave the spotlight to enter the military as part of the two-year service compulsory for all Korean males.

"Coffee Prince" star Gong Yoo met with around 1,000 fans in a special meeting Sunday. He asked fans not to worry while he was serving in the military, but became emotional during the event.

Gong's red-hot career will have to be put on hold for the next two years. The actor, who recently gained popularity for his role in the hit MBC drama, will enter the military Jan. 14.

As they prepare for the military, many male stars are scrambling to finish shooting TV dramas and movies, hold concerts, release new albums and endorse products.

Jo is filming the historical epic "A Frozen Flower" directed by Yoo Ha, while Kim Rae-won will appear in the TV drama "Gourmet" ("Sikgaek").

Eric Mun and Kim Dong-wan will be the first two Shinhwa members to enter the military. The group's 10th anniversary concert in March was also seen as a "Farewell" concert because of the members' impending service.

Sung Si-kyung held a concert last December, and is said to be releasing an album before he joins the military in February.

Eru received much attention from the media, after he gave up his American citizenship two years ago. His management agency said Eru, entering the military in the second half of the year, will hold his first solo concert next month.

If these stars are worried fans may forget about them during their two-year absence, they should look at the experiences of male stars returning to the entertainment scene.

Even though actors Song Seung-heon and Jang Hyuk entered the military in 2004 after they were accused of draft dodging, their careers did not seem to have suffered lasting damage.

Jang appeared in last year's hit drama "Thank You", and is currently shooting his first Hollywood film "Dance of the Dragon". Song is filming "Fate" with kwon Sang-woo, which will be released this year, and will soon appear in a TV drama "The City of God".

Other actors who are making a comeback after being discharged from the military are Ji Sung and So Ji-sub. Ji Sung is appearing in the MBC medical drama "New Heart", while So is still filming the drama "Cain and Abel".

On the other hand, Won Bin, who was discharged in 2006 due to an injury, has not announced plans for a film or drama. He only made brief appearances as a UNICEF Ambassador last year.

"Male Stars Join Military This Year"
by HanCinema is licensed under a Creative Commons Attribution-Share Alike 3.0 Unported License.
Based on a work from this source