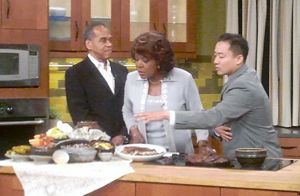 To celebrate Filmfest DC's 25th anniversary and a slate of Korean films as one of this year's highlights, local news station WUSA 9 interviewed Tony Gittens, director of the international film festival, and Hosan Kim of the Korean Embassy's Korean Cultural Center, which is supporting the event, on the synergy of food, culture, and film this year.

"We have five special films from Korea", Gittens told WUSA 9's JC Hayward in the segment that aired April 6. "We've been doing this for 25 years, bringing the best in world cinema right here to Washington DC".

One of the featured Korean films is The Recipe. The Korean title for this crime and mystery film about a suspect chef is actually doenjang jiggae (된장 찌개), the name of a traditional Korean stew made from fresh vegetables, tofu, and an earthy aged soybean paste.

"It's like soul food for Koreans, or chicken soup for Americans", said Kim.

Hayward was able to sample the dish on air, along with other Korean classics such as barbequed beef short ribs, or galbi (갈비), the spicy pickled cabbage known as kimchi (김치), and healthy multigrain steamed rice.

Filmfest DC features more than 80 films in various locations across DC, April 7-17. For complete details on scheduling, locations, and purchasing tickets, please visit www.FilmFestDC.org. Tickets should be purchased in advance.


Before the rise of the internet and movie downloading, Filmfest DC began as a small operation in 1987, and was the first festival in the DC area to present popular international films. Now in 2011, Filmfest DC is celebrating its landmark 25th anniversary, with films from South Korea and Scandinavia as the two highlights of this year's festival.

In recent decades, South Korea has become home to one of the most prominent film industries in the world, especially in Asia, where South Korean films rival those of Hollywood and Hong Kong. The Korean Embassy's Korean Cultural Center is proud to be part of Filmfest DC's 25th anniversary and to promote Korean films in the United States. The five films listed below have been selected for FilmFest DC 2011 to showcase the diversity of Korean cinema.

For complete details on scheduling, locations, and purchasing tickets, please visit www.FilmFestDC.org. Tickets should be purchased in advance.

"A Brand New Life" is a film directed by and based on the life of French-Korean director Ounie Lecompte. This is a touching film about a Korean girl who is given up by her family, put into an orphanage because of the war, and later adopted. Ounie Lecompte herself will attend as an honored guest of Filmfest DC and the Korean Cultural Center.

"Actresses", directed by Lee Jae-yong, is shot in documentary style, without a script, but includes a multigenerational cast of women who creates exaggerated representations of themselves as they negotiate the Korean film industry. This is a fun film that takes a new approach.

"The Man From Nowhere", directed by Lee Jeong-beom, was an action-thriller blockbuster in South Korea in 2009 and is here to show a different side of Korean cinema. A man without meaning in his life suddenly has his best friend taken away from him. He will stop at nothing to save her and overcomes challenges along the way. This film is sure to be entertaining for new audiences.

"Chihwaseon", was directed by the legendary Im Kwon-taek, considered to be one of the founding fathers of the South Korean film industry. This film is a beautiful story of a tortured Korean painter in love with women, drinking, and painting, who is faced with many challenges during Korea's period of colonization, political reform, and revolt.

"The Recipe" mixes dark comedy, crime, romance, and food to create a perfectly unique storyline. A fugitive stumbles upon a restaurant with a soup that is to die for, and finds out The Recipe was made by a mysterious woman who was taken in by the restaurant owner. This is a fun movie that is sure to whet your appetite for more Korean films.