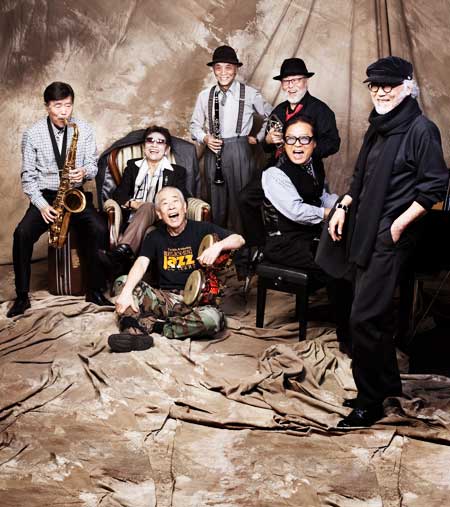 Seven of Korea's first generation jazz artists will perform a group show at the Seoul Arts Center Jan. 28, showcasing tracks from the soundtrack of the documentary / "Bravo! Jazz Life". Courtesy of In Production

The country is to liven up with jazz this month, with a diverse lineup of international and domestic names making their way to Seoul. With the smooth beats of pop jazz artists and pioneering Korean names, prepare to groove into February with foot-tapping rhythm.

'The Miracle of Music'

Korean jazz artist Kim Kwang-min celebrates 20 years since his debut with the opening of The Miracle of Music concert series at 8 p.m. on Jan. 20 and 21 at the Sejong Center for the Performing Arts.

The veteran pianist has made his name on the local scene for "Koreanizing" jazz, with comparisons to George Winston and several albums under his belt. Since his debut with Warner Music Korean in 1991, Kim has created his own genre, mixing elements of jazz, classical and new age.

The artist reunites with guest performer singer-songwriter Yoon Sang, whom he previously collaborated with during a performance last year. Ballad crooner Sung Si-kyung will also join the pair on stage, lending his distinct vocals to the harmony.

The next performance at Miracle will be provided by fusion and smooth jazz artist David Benoit at 7 p.m. on Jan. 22.

The acclaimed musician returns for his first concert in Korea in four years, following the release of his 13th full-length album "Earthglow". The director of the Asian American Symphony Orchestra since 2000, and nominee for the Grammy Awards five times, Benoit also played for three former U.S. presidents, including Bill Clinton and Ronald Reagan.

The third and final installment of the concert series will feature singer-songwriters Rachael Yamagata and Maximilian Hecker at 7 p.m. on Jan. 23. The two pop artists will both perform full sets of their music.

Yamagata has been making headlines in her native United States since her debut in 2004, and she's been permeating her way into the collective hearts of Koreans with "Be Be Your Love", after it aired in a TV commercial here.

German-born Hecker first took to the stage in 2001 and received acclaim domestically when his hit "I'll Be a Virgin, I'll Be a Mountain" aired on the popular TV drama "Coffee Prince".

Seven pioneering Korean jazz artists gather for a joint concert at 8 p.m. on Jan. 28, at the Concert Hall of the Seoul Arts Center, southern Seoul.

The stars from the 2010 documentary "Bravo! Jazz Life" ― centered around the tale of first generation Korean jazz artists that emerged from the Korean War (1950-53) ― will recreate the soundtrack from the feature live on stage.

Known as the "mother of Korean jazz", vocalist Park Sung-yeon will perform alongside the famed Kim Jun while percussion master Ryu Bok-sung will be on drums and bongo. The legendary Shin Kwan-woong will be on his usual black-and-white keys, while Kim Soo-yeol will be on tenor sax. Choi Sun-bae on trumpet and Lee Dong-ki on clarinet will round out the talented group.

Special duet performances with younger performers will bridge the gap between older and modern pioneers. Vocalist Malo will sing with Park while saxophonist Lee Jung-sik will perform with Kim Jun for the song "My Way".

"Those watching these artists on stage will shed tears of infinite emotion", Nam Moo-sung, director of the documentary, said in a statement. "Likely because their music carries their intransigent pride for jazz and the entirety of their lives, like in a movie".

"Although 120 minutes worth of their music isn't enough to speak for the history of jazz, through the stage they will communicate that Korean jazz is alive and strong, and it will be an emblematic suggestion for the advancing direction of the genre".

For those interested in seeing the documentary before the concert, a special screening will be held Saturday at 7:30 p.m., at the Sangsang Madang Cinema in Hongdae. Afterward, fusion indie "gayageum" (12-string zither) artist Jung Mina will perform. For other screenings and more information, visit www.blog.naver.com/bravojazz.

"Local jazz pioneers, int'l stars round out January "
by HanCinema is licensed under a Creative Commons Attribution-Share Alike 3.0 Unported License.
Based on a work from this source