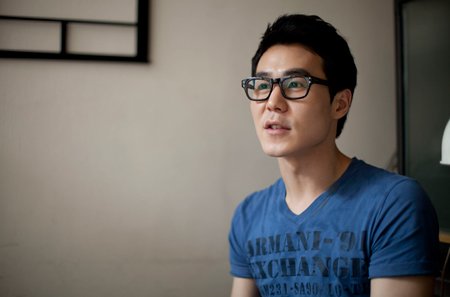 Actor Lee Yool speaks during an interview with The Korea Times at a cafe in Daehangno, Seoul, Friday. He currently plays Yeol in a homegrown musical "Poongwallju" and Iemoto in the Japanese play "Kisaragi"./ Courtesy of Lee Soo-jin

Actor Lee Yool has a handsome, chiseled face with fair skin and mischievous yet sorrowful eyes. He plays Yeol, the first-rate male courtesan, in a new musical "Poongwallju", which raised its curtain in May in Daehangno, Seoul's small theater district. Lee's Yeol has a sense of innocence like a little boy but he could be cold-blooded at the same time. No wonder the queen falls for him.

The title literally means the owner of the wind and moon, which comes from the title of the leader of Hwarang, a group of elite male youths in the Silla Kingdom (57 B.C.-935 A.D.). In this musical, they serve noblewomen in a fictional place called Unru.

Yeol is the most popular one among them and Queen Jinseong regularly seeks his company. He was satisfied with his life there as long as he could live with his friend Sadam. But his destiny takes an unexpected turn when the queen becomes pregnant with his child and wants him to be her prince consort. Though Jinseong is the 51st ruler of Silla Kingdom, the musical is totally fictional.

The musical, written by Jeong Min-a and composed by Park Ki-heon, began as a part of "CJ Creative Minds", a program to support young creative minds sponsored by CJ Culture Foundation. It received rave reviews from audiences and CJ E&M picked it up and developed it further for commercial production.

Portraying the delicate relationships among Yeol, Sadam and the queen, Poongwallju is currently one of the hottest musicals in Daehangno and Lee joined the production in mid-June, alternating in the role of Yeol with Sung Doo-sup. 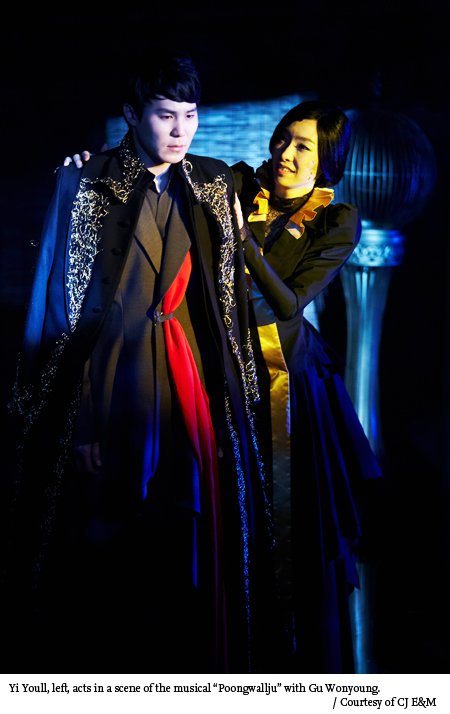 The 28-year-old actor said he chose to take a role in "Poongwallju" because he saw plenty of room for interpreting the character. "He could be soft and sweet or a bad boy and I chose the latter", he said. "As I was put into the middle of the show, I wish to inject a breath of fresh air into it".

Yeol and Sadam grew up together on the street and they are best friends. Since the script does not say much about their past, except for a song describing when they were begging on the street together, many possibilities are open for the actors to interpret and for the audience to imagine.

"If it were a big 150-minute musical with an intermission, it could have unraveled background information. Instead, 'Poongwallju' is full of implications", Lee said.

Lee described Yeol's relationship with Sadam as each other's other self. "The overall atmosphere of the musical is dark, but I try to lighten the mood when Yeol and Sadam are together", he said. "It could be either friendship or love, but he is more like an alter ego for me".

When Lee talked about Queen Jinseong, his face hardened. "The queen was just a customer to Yeol, maybe a woman of rank, nothing more", he said. "If a woman has a crush on me and I'm not interested in her, I would clearly tell her that I have no interest in her. If she continues to express her love, I would rather get tired of her. It's the same with the queen. Her greed brought the ruin upon herself".

In the musical, Queen Jinseong tells Sadam to leave Yeol and Sadam jumps to his death. However, instead of accepting the queen's propose, Yeol also kills himself in front of the queen.

"There is no compassion for the queen, as she was just a part of business for Yeol", he added.

He is also keen on details. For instance, the different attitude toward Sadam and the queen is revealed by his gestures. "I take Sadam by the hand and the queen by wrist", he said. Such small points make Yeol's character more solid, understandable.

Lee said he acts simply when Yeol confronts the queen after finding out about Sadam's death. "He only knew that his happiness is gone because of the queen. That is why he is so desperate", he said.

In the last scene, a white fabric covers the black world of the queen and Sadam sits on the throne. "I consider the scene as a recollection of memories with Sadam. They could have hung around, Sadam playing the role of the queen", he said.

Lee debuted in 2007 as Nathan Leopold in "Thrill Me". He starred in musicals "Finding Kim Jong-wook" as Kim Jong-wook and "Guys and Dolls" as Nathan. He also appeared in the movie "Pacemaker" (2012).

Currently, Lee is also starring in the Japanese play "Kisaragi", which tells the tale of five fans of a C-list model Kisaragi Miki, and his character Iemoto is totally different from Yeol. "When I was rehearsing for Yeol in the day and performing Iemoto at night, I was confused at first and became stressed due to the clash of the characters. But then I realized that being onstage is the answer. When I act and unravel the character's story onstage, I can pat myself on the back and get out of the character", he said. "I love the sense of disappearing in the crowd on the subway or bus, after performing in a show".

After five years of acting, he is still eager to find and develop fresh characters. "I like to take the roles which weren't performed by other actors. That's why I prefer premieres of homegrown musicals", he said.

Lee's earnest eyes twinkled while talking about his passion for acting. "The best thing about being an actor is that I can live other people's lives on stage. I think it is worthwhile even if there is only one audience", he said. "Acting is addictive".

"Lee portrays desperateness in 'Poongwallju'"
by HanCinema is licensed under a Creative Commons Attribution-Share Alike 3.0 Unported License.
Based on a work from this source