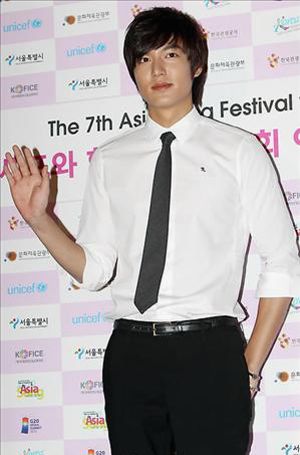 Actor Lee Min-ho will participate in a fan meeting event held in Tokyo next month, which has been planned to help Haiti's reconstruction.

According to his agency Stout Entertainment and Yamaha Group in Japan, Lee Min-ho will see his Japanese fans at the event entitled "Friends of the UN and the Global Peace and Love", which will be held at the International Forum Hall in Tokyo on November 11.

This event will be co-hosted by the Asia Pacific branch of the NGO called the "Friends of the UN", which the UN had approved, and the Yamaha group.


The profits from the event will be utilized for rebuilding Haiti which had been devastated by a severe earthquake in the beginning of this year.

The organization had already held the same events in the form of a concert to help Haiti last July and September, and singers such as Shin Seung Hoon, Big Bang, and Beast had participated in the concert.

This event will be held as a talk show in which Lee Min-ho will appear as the sole participant.

Lee will talk about the behind-the-scenes stories of the drama "Personal Taste", which is now being broadcast in Japan, and he will also talk about the topic of the event, which is "Friendship connects the world through people".