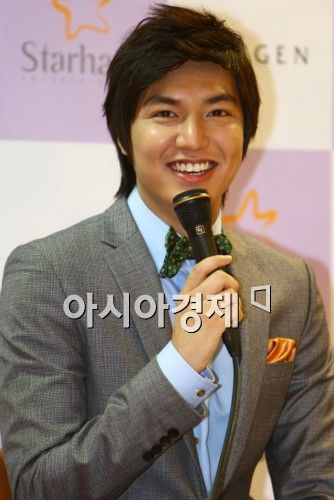 Hallyu star Lee Min-ho celebrated his upcoming birthday with his fans over the weekend, hosting a fan meeting for some 4,500 fans who turned up from Korea, Japan and China to see the actor.

The actor entertained his local and foreign guests in various ways at the event titled "2010 The Special Day with Minoz" held at Seoul's Kyung Hee University on June 20.

The fan meeting started with a showing of video message sent in by the fans, followed by a musical performance by Korean pop group See Ya, who performed their hits "His Voice" and "My Heart Is Heavy With Emotions", which was featured on the soundtrack for Lee's TV series "Personal Taste".

Lee too displayed his vocal chops, singing the song "Falling Slowly" from the Irish indie hit film "Once" (2006) which he had been practicing for the fan meeting.

"While I was rehearsing the song, I realized that singing isn't for everyone", said the actor. "I am not talented enough [to release an album] but I would like to take part in a soundtrack if the opportunity came by".

He added that he is a fan of the film "Once" and thinks "Falling Slowly" suits his voice.

Lee also carried on a friendly conversation with comedian Yoon Hyung-bin, who served as the emcee for the fan meeting.

The event featured several musical guests including boy band 2AM, female singer Younha and Taiwanese entertainer Joseph Cheng, who is considered the "Rain of Taiwan". Lee and Cheng exchanged gifts and promised to maintain their friendship in the future.

Below is a Q&A session held with Lee Min-ho.

Q: It takes about two days to shoot a fashion spread or commercial. What do you afterwards?
▶ Lee: Zone out.

Q: Any changes after removing the metal pin?
▶ Lee: A little discomfort but nothing too inconvenient in everyday life.

Q: How do you choose your acting projects? And what kind of roles do you want to play?
▶ Lee: I want to play all kinds of professions. No rule about how I choose my acting work. Just when I find the character attractive.

Q: What do people in other countries call you?
▶ Lee: I have one name but everyone says it differently. People from Thailand elongate the Min.

Q: Any other dream you want to achieve besides acting?
▶ Lee: Soccer player. My childhood dream was to become a professional soccer player.

Q: What Do You Do? on your days off from work?
▶ Lee: I sleep, play, eat, sing and work out. I learn a lot of things so the day goes by very fast.

Q: Your most memorable character?
▶ Lee: Mino-me. (My character doll)

Q: How do you break the ice with the staff members when you start shooting a new film or drama?
▶ Lee: I try to talk to them a lot. I had met Son Ye-jin for the second time on the day we shot the poster [for TV series "Personal Taste"]. We had to act like we were close friends for the poster concept and I got so into the acting that I called Son Ye-jin, "Dork". There was an immediate silence.

Q: What do you wear when you go to sleep?
▶ Lee: I tend to walk around in my underwear when I'm home.

"Lee Min-ho spends weekend with Asian fans"
by HanCinema is licensed under a Creative Commons Attribution-Share Alike 3.0 Unported License.
Based on a work from this source