Lee Min-ho's impact in the Philippines 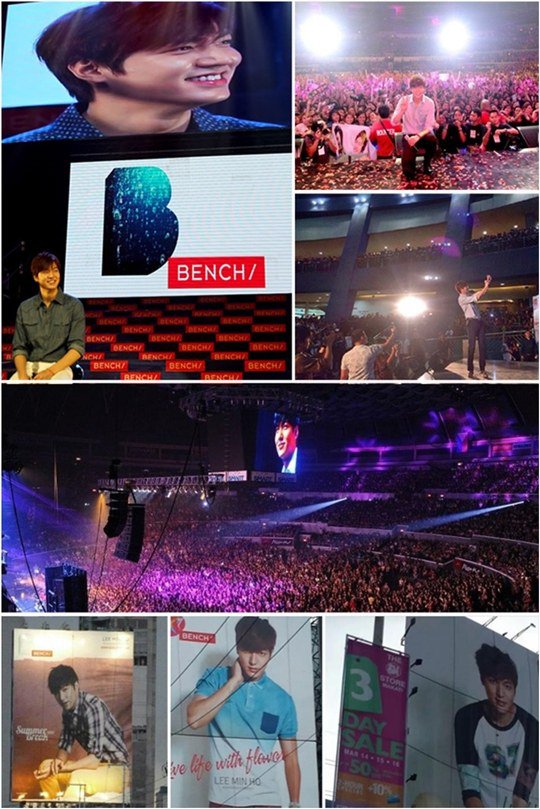 Hallyu star Lee Min-ho has influenced the Philippines too.

The Filipino global clothing brand BENCH signed a deal with Lee Min-ho for the fourth year since 2012.

BENCH was founded in 1987 and has become one of the leading clothing brands in the Philippines. The brand is only known to deal with worldwide famous stars such as Adam Levine from Maroon 5, Bruno Mars, David Archuleta, Joe Jonas from the Jonas Brothers and more. Lee Min-ho's fourth year contract makes it the longest contract with BENCH ever.

As a model for BENCH, Lee Min-ho has contributed to a huge development in sales and has influenced a sell-out in almost everything he puts on. BENCH sources say that his aura and fashion sense topped off with his tall height has much to do with this result and even visited Korea on the 14th to do a chase about Lee Min-ho.

Lee Min-ho visited the Philippines in cooperation with BENCH last year and the fans gathered at the airport to see him, causing a huge congestion in traffic everywhere he went. Rumors say that there was even word about making his visits a national holiday. Not only is he big in the Philippines but in Indonesia, Malaysia and other Asian countries too.

Lee Min-ho's dramas and films like "Boys over Flowers", "Personal Taste", "City Hunter", "Faith", "The Heirs" and even "Gangnam Blues" are being broadcast on the local channel ABS-CBN.

The leading face for the Korean Tourism Board, Lee Min-ho's reputation lives on to the Philippines now and there's going to be an offline mass promotional event with BENCH.

"Lee Min-ho's impact in the Philippines"
by HanCinema is licensed under a Creative Commons Attribution-Share Alike 3.0 Unported License.
Based on a work from this source