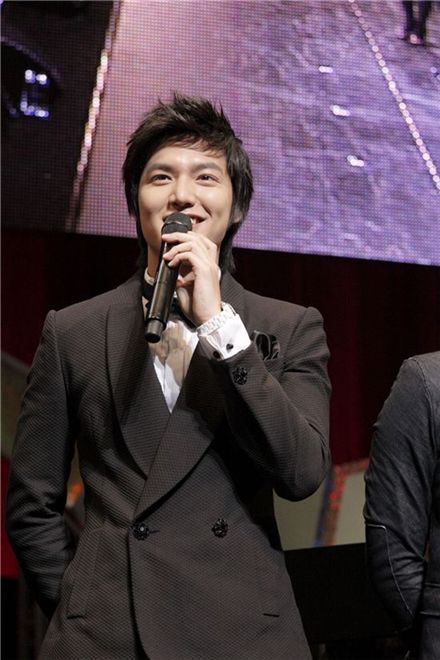 The actor met with some 5,000 fans at "Boys over Flowers Last Event - Graduation", held at Yokohama Pacific Hall on April 25, making his last appearance as the show's main character Goo Joon-pyo.

"Thank you for the support and love you have shown toward me and the drama", the actor said. "'Boys over Flowers' is a drama that gave me many memories. I am now officially graduating from the character Goo Joon-pyo, but I will be showing you new characters from now on".

The actor asked his Japanese fans to look forward to his current TV series "Personal Taste", which he said is likely to air in Japan sometime in the future.

The event also featured several of his co-stars from "Boys over Flowers" including actors Kim Beom, Ku Hye-sun and Kim Jun of T-Max. Popular boy band SHINee also heated up the venue with their musical performance.

Lee, 22, became a household name in Korea and throughout Asia last year with the success of "Boys over Flowers".

He currently stars in MBC's Wednesday/Thursday evening drama "Personal Taste" as a man pretending to be gay in order to move in with a female friend, played by Son Ye-jin.

"Lee Min-ho attends last "Boys Over Flowers" Japan event"
by HanCinema is licensed under a Creative Commons Attribution-Share Alike 3.0 Unported License.
Based on a work from this source