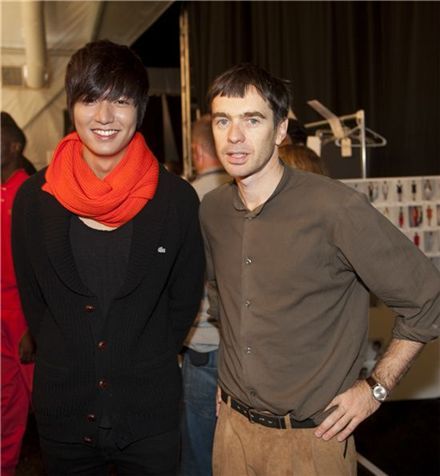 APR announced in a press release that Lee was one of the few Korean celebrities invited to New York Fashion Week's 2011 Summer/ Spring collection for Lactose by French designer Christophe Lemaire.

At the end of the event, Lemaire thanked Lee for coming to see his final show, and the actor's Asian fans sang the song "You Are My Everything" in front of the Lincoln Center for Lee to congratulate him on his New York Fashion Week visit.

Lee, 23, made his debut in the small screen in 2006 appearing in various TV and short dramas. He became a household name in Korea and other Asian countries after starring as Goo Jun-pyo in the KBS hit series "Boys over Flowers" (2009) and playing a homosexual man in MBC's "Personal Taste" (2010).

He will be taking on the role of a private detective in the upcoming Korean small screen adaptation of Japanese manga "City Hunter" next year.

"Lee Min-ho attends fashion show in New York"
by HanCinema is licensed under a Creative Commons Attribution-Share Alike 3.0 Unported License.
Based on a work from this source