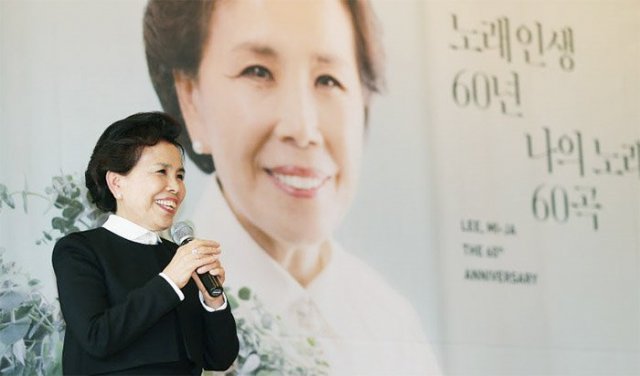 Singer Lee  Mi-ja speaks at a press event in Seoul on Thursday.

Legendary singer Lee  Mi-ja released a new album on Thursday to celebrate the 60th anniversary of her debut.

The album contains a selection of 60 songs from the more than 2,100 songs on about 500 albums she has released throughout the six decades of her career.

Twelve songs on the album were re-recorded. "I wanted to incorporate my singing voice as it sounded in my 20s through to my 70s on one album. You will be able to hear the changes in my voice over time", she said.

Lee will also hold concerts at the Sejong Center for the Performing Arts in Seoul from May 8 through 10.

"Lee Mi-ja Releases Album to Mark 60 Years in Showbiz"
by HanCinema is licensed under a Creative Commons Attribution-Share Alike 3.0 Unported License.
Based on a work from this source