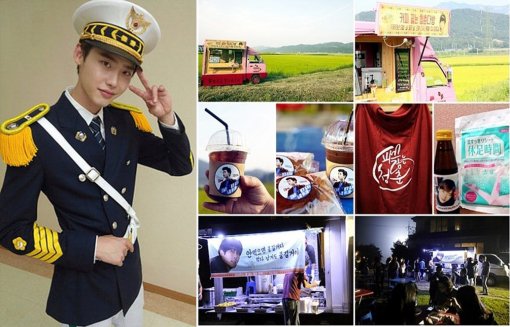 The fans sent a food truck and a coffee truck to the filming site of the movie "Hot Young Bloods".

The fans encouraged the staff and crew with the banner "Coffee Hot Young Bloods" and a picture of Lee Jong-suk on it.

The food truck had the sign, "Eat it or die. Don't leave food waste" which is a parody of Lee Jong-suk in the drama "I Hear Your Voice".

Netizens say, "Lee Jong-suk's fans are amazing", "It's all from the heart", "It's such a good present" and more.

Meanwhile, Lee Jong-suk takes on the role of Casanova Joong-gil in the movie "Hot Young Bloods". It will be released next year.

"Lee Jong-suk's fan presents him with coffee car and food truck"
by HanCinema is licensed under a Creative Commons Attribution-Share Alike 3.0 Unported License.
Based on a work from this source