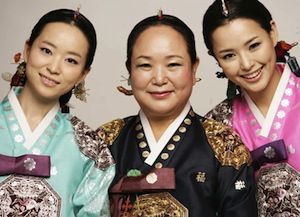 Beauty queen-turned-actress Lee Honey is returning to the spotlight as a gayageum (12-string traditional Korean instrument) player along with her mother and sister for a concert at the National Center for the Traditional Performing Arts on Dec. 25.

Lee's mother, Moon Jae-sook, is a professor of Korean traditional music at Ewha Womans University, and is also a nationally recognized "intangible cultural asset" as a gayageum player.

Lee's sister, Seul-gi, graduated with a degree in Korean traditional music from Seoul National University. She has released three albums since 2005 ― "The Song of String", "In the Green Caf?" and "Blossom".She is a member of the KBS Orchestra of Traditional Korean Music and has received the President's Award from Korea's National Classical Music Institute. Currently a doctoral student in Korean classical music at Seoul National University, she has performed at such venues as Sejong Center for the Performing Arts, KBS Hall, the University of California, Los Angeles and Carnegie Hall.

The concert will feature a fusion of traditional and modern music to celebrate the festive mood on Christmas. They will play popular songs such as The Beatles'"Let It Be" and Baek Ji-young's "Don't Forget", along with carols such as "White Christmas".

Lee is also a professional gayageum player, and was named a gayageum prodigy by the Kumho Art Center, the most prestigious musical foundation in Korea. She majored in Korean traditional music at Seoul National University.

Lee won the 50th Miss Korea pageant and finished fourth in the Miss Universe pageant in 2007.

Lee garnered popularity for the law drama series "The Partner" and the musical "Polaroid", in which she performed alongside Andy Lee, a member of boy group Shinhwa.

She is currently performing in the play "Legally Blonde" and will star in a new drama titled "Pasta" next year.
___________________
Beauty queen-turned-actress Lee Honey, right, will hold a concert along with her mother, center, and sister, left, at the National Center for the Korean Traditional Performing Arts on Dec. 25. / Korea Times File

"Lee Honey to Hold Traditional Concert on Christmas"
by HanCinema is licensed under a Creative Commons Attribution-Share Alike 3.0 Unported License.
Based on a work from this source