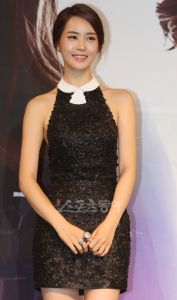 Lee Da-hae is turning into a female warrior.

Lee Da-hae is about to put on some moves like never seen before through the KBS 2TV drama "IRIS 2".

Lee Da-hae has been learning action from the martial arts director Jeon Moon-sik who coordinated the action for "Duelist", "Secret Reunion", drama "IRIS" and "ATHENA".

According to a spokesperson, "IRIS 2" has the scale of a blockbuster and action will be put on a whole new level. Therefore, Lee Da-hae is working hard everyday to pull off the moves that even Kim Tae-hee and Soo Ae didn't try.

Lee will be showing off her moves in the Hungary Budapest scene at the end of November.

Also, being the gunnery gold medalist in the drama, she's been carrying around a fake gun to get used to the feeling of it.

She needs to do action almost as high level as a man's and she's been practicing shooting everyday.

"Lee Da-hae turns into a female warrior"
by HanCinema is licensed under a Creative Commons Attribution-Share Alike 3.0 Unported License.
Based on a work from this source