Lee Byung-hun role to expand in sequel to G.I. Joe 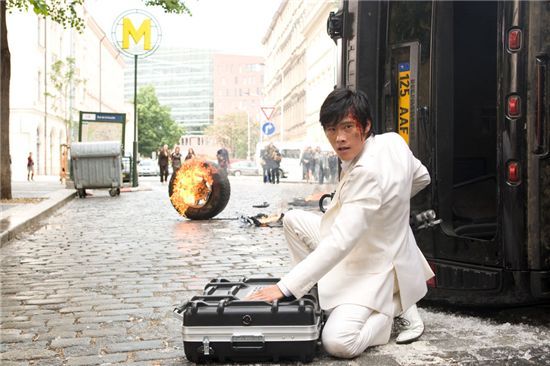 Scene from "G.I. Joe: Rise of the Cobra" [Paramount Pictures]

Hallyu star Lee Byung-hun may be headed to establishing firmer ground in Hollywood.

Paramount Pictures, the creators of "G.I. Joe: The Rise of Cobra", has reportedly decided to give Lee's character Storm Shadow more weight in the second installment of the action flick set for release in 2012.

Paramount judged that the Korean actor contributed much to the success of the first pic and are developing on the stories surrounding Storm Shadow.

His agency BH Entertainment however, said they do not know as of yet how important Lee's role will be since the screenplay for the movie is not been complete.

Filming for the sequel of the movie based on the Hasbro toy line is set to start in August.

Lee, 39, has starred in numerous dramas and movies since his debut in 1991. He is considered one of the best actors in Korea, having won numerous awards including the grand prize at major broadcaster KBS' Acting Awards ceremony last year for his role in hit TV series "IRIS".

He made his Hollywood debut through "G.I. Joe" and starred in Franco-Vietnamese pic "I Come with the Rain" alongside actors Josh Hartnett and Takuya Kimura last year.

"Lee Byung-hun role to expand in sequel to G.I. Joe"
by HanCinema is licensed under a Creative Commons Attribution-Share Alike 3.0 Unported License.
Based on a work from this source