Lee Bo-young, Lee Jong-seok and Yoon Sang-hyun in "I Hear Your Voice" 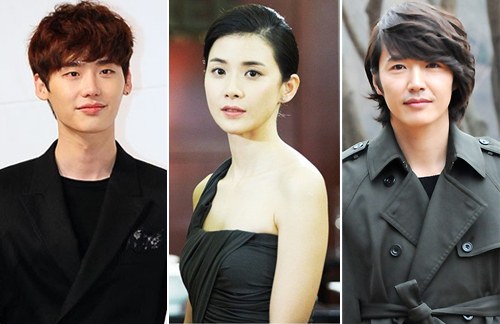 Actress Lee Bo-young and actors Lee Jong-suk and Yoon Sang-hyun have been cast for the SBS drama "I Hear Your Voice".

This drama highlights government lawyers who fight for the 1% of innocence.

Lee Bo-young takes off the feminine image and becomes lawyer Jang Hye-seong, one who doesn't have a bit of concept or manners. She's thick-faced and comical.

Lee Jong-suk who was the rebellious kid in "School 2013" last year is now a super powered boy who can read the opponents' minds. Park Ha-soo, who overcomes his tough past and contains a mystical power, Lee Jong-suk will light fire in the hearts of the ladies once again.

Yoon Sang-hyun's role if Cha Gwan-woo, a passionate former cop who becomes a government lawyer. Meanwhile, "I Hear Your Voice" will be broadcasted in June and is written and directed by Park Hye-ryeon and Jo Soo-won.

"Lee Bo-young, Lee Jong-seok and Yoon Sang-hyun in "I Hear Your Voice""
by HanCinema is licensed under a Creative Commons Attribution-Share Alike 3.0 Unported License.
Based on a work from this source